Get fired up in Valencia

(CNN) -- It's not as achingly hip as Barcelona and it's more manageable than Madrid: Spain's third city has plenty of flavor, an urban edge and uniquely Valencian oddities. 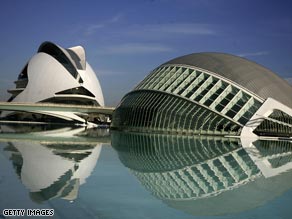 From medieval cathedrals to Calatrava's futuristic City of Arts and Sciences, Valancia packs in plenty.

Where else could you glimpse the Holy Grail in the morning, gorge on paella on a Mediterranean beach for lunch and then wander along a old river bed transformed into a park and visit architectural blockbusters that look like a Star Trek vision of a colonized planet?

After an early morning shot of coffee and, depending on your sugar tolerance, churros, the Cathedral in the heart of the old city is the best place to start the day. Located on the Plaza de la Reina, the cathedral is an impressive mix of gothic, baroque and Romanesque architectural styles.

As striking as the many parts of the cathedral are, the sight of the Holy Grail my leave you underwhelmed -- to the unenlightened it resembles something closer to a plastic mug circa. 1973.

If you're in town on a Thursday, catch the enactment of a tradition almost as old as the grail. The Tribunal de las Aguas, or Water Court, is the meeting of the city's elders, who gather outside the cathedral's Plaza del Palau for around twenty minutes. It generally involves a number of old men sitting down not doing very much, while one pronounces what has been decided, and it's a bit of a tour-group hot spot.

On the other side of the plaza is the octagonal Miguelte Bell Tower, where you can climb 207 steps for a panoramic view of the low-rise old city. Not far through the old city's happy tangle of narrow streets is the Lonja: a fifteenth-century trading house, studded with a fine collection of mugging gargoyles now preserved under UNESCO Heritage status.

Bringing yourself out of the city's medieval landmarks, you can feast on modern culture at IVAM, the city's cheap and excellent modern art gallery.

But for a vision of the future as designed by local superstar architect Santiago Calatrava, wander along the city's old river bed towards The City of Arts and Sciences. It's made up of four gleaming white architectural confections, including the Palau de Les Arts Reina Sofia concert hall, which is covered in cracked white tiles that glisten in the sunlight.

A few minutes away is the final piece of the architectural dreamscape, the Oceanografico -- one of the world's biggest aquariums. With two shark tunnels, beluga whales, walruses and thousands of fish it should sate anyone looking for a glimpse of the life aquatic.

The Mediterranean Sea itself is not far away, and public transport in Valencia is a convenient way to get around town when things get out of comfortable walking distance. To get to the beach from the center of town hop on a tram on line 5 from Colon towards Neptu.

When there you'll find a beachside strip of hotels and paella restaurants offering versions of the city's most famous culinary dish. The area was scrubbed up when Valencia hosted the Americas Cup, sailing's blue riband event, in 2007. Beyond the rice and seafood delights and the anodyne redeveloped area by the docks, the beach bar of Hotel Neptuno offers some choice classy cocktails. To be extra chilled, snag one of the massage therapists walking along the promenade for a bargain 10 euro beach massage or reflexology session.

Back in town, the covered market of the Mercado Central is a must, not just for foodies, but for people-watching. The beautiful modernista building was constructed in 1928 -- look out for the green parrot weathervane.

Eating and drinking in the city is a rich experience. Tapas is ubiquitous, but make sure you try horchata -- a sweet local specialty made from a mix of water, sugar and ground tigernut. Among the city's numerous specialist bars serving the cooling drink, the Horchataria de Santa Catalina provides some fine mixes in a traditional tiled interior.

For late night drinks the bars and cafes around Barrio del Carmen are popular with locals and visitors -- San Jaume, housed in an opulent old pharmacy, is a prime spot for people watching at any time of day or night and a little further away, Café Lisboa is buzzy and friendly on the Plaza Dr Collado.

Summers in the city are blistering, with mid-autumn and spring the best seasons to visit. But it's every March that Valencians exhibit the Spanish love for a street party during the Las Fallas festival.

Its origins are a bit murky, harking back to pagan rituals, but today it's a noise fest, with daily processions and ear-splitting fireworks set off through the city's streets, even during the daytime. The biggest daily barrages take place in the Plaza del Ayuntamiento -- the city's main square. Out of season some of the effigies and floats built during previous festivals can be seen year round at the Museum of Las Fallas on Plaza Monteolivete.