Candace Bushnell: 'New York is a city of energy vampires'

NEW YORK (CNN) -- Candace Bushnell is a New Yorker and the author of five novels, including the best-selling "Sex and the City" and "Lipstick Jungle". She tells My City_My Life about her marriage, real life in New York and the secrets of her success. 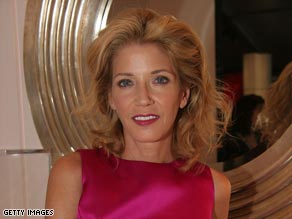 CNN: How would you describe your work?

Candace Bushnell: I try to write about the human condition, and shopping, materialism and consumerism comes into that, because America is a very consumerist economy.

CNN: Tell me about when you first arrived in New York.

CB: I first arrived in New York in 1979. I was 19 and I was going to University in Houston, Texas, and I decided that I knew what I wanted to do and it was time to go and do it. I literally ran away from college.

Then I went to an acting school, "HB Studio" and I moved into this apartment with three other girls who wanted to be actresses. Of course, they were all waitresses so I was a waitress.

I got paid $1,000 for it and I was like "Oh my god, who says you can't make it in New York right away!" Of course that little dream crashed in about a month.

CNN: So you didn't have an overnight success?

CB: I was a freelancer all through my twenties. I did about one story a month and I wanted to write fiction, so the stories that I would do were precursors to "Sex and the City."

I started working for the NY Observer when I was 33. After I had been writing for them for about a year and a half the editor said, "Your stories are the most talked about stories in the Observer, you should have your own column." I was paid $1000 a column and the reason was that the column "Sex and the City." was so popular that they sold newspapers and advertising off it.

People in New York were faxing it to their friends who worked in the movie business in LA and almost immediately I was getting phone calls from movie producers who wanted to buy it and ABC and HBC wanted to buy it.

It started as a seed, with an absolute truth that people may agree with or it may disturb them. It disturbs me sometimes when I read it because it's very wrong and very honest. I think most call it cynicism but I call it realism -- it is absolutely raw reality. It was never written for a big audience and it was never written to make people feel good. It was written as the truth in a humorous way.

CNN: How do you feel about the TV series?

CB: I think the reason why the TV series has continued, and has continued as a movie, is that they have never lost the authenticity of the column.

CNN: How would you describe New York today?

CB: It's a very, very busy place and it's a city where everybody has a place to go and a million things to do. It certainly can be a very stressful city but it can also be an incredibly exciting city. It is a place where your dreams can come true.

CNN: What do you do to get away from it?

CB: I go to Connecticut and I look at bugs and I don't socialize. If I'm here for 10 days in a row I'm exhausted.

When I was younger the energy really fed me. This is a city of energy vampires -- people really feed on each others' energies and that's why New Yorkers talk fast and gesture and they'll come in and say "Oh my god you won't believe what happened!" That's a normal greeting in New York.

CNN: What was it like to get married and stop being the single girl?

CB: Charles [Askegard, a principal dancer with the NYC ballet] and I met at the NYC Spring Gala seven years ago. It was really a magical moment because I was 43 and I had kind of given up on that. I was cynical about relationships and I wasn't sure about marriage -- I was always very worried that marriage was stifling.

But when I saw Charles across the room I thought, "That's the man you're going to marry." We met and we talked and I thought, "This is the nicest guy I have ever met in my life," and we went to a club and we danced and we kissed.

We got married two months after we met.

CNN: Can you describe New York in 5 words?