New York City is the quintessential metropolis, the city other cities aspire to be. Frenetic, chaotic and glamorous, it may not be the capital of America, or even New York State, but in many ways it's the capital of the world. 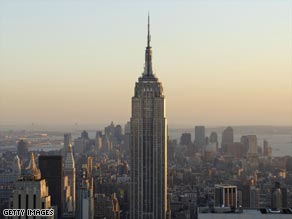 More than anywhere else, New York symbolizes the American Dream and the aspirations of the 20th century. Ever since it was christened New Amsterdam in 1694 it has been a beacon for immigrants, the Promised Land where anyone can be anything they want.

The "huddled masses" who disembarked at Ellis Island under the gaze of the Statue of Liberty built a city on hard work, determination, and a belief that anything was possible. The result is the Big Apple, the city that never sleeps, the place where you can make things happen.

New York is a celebrity city -- even if you've never been there you'll recognize it from countless movies and TV cop shows. There's something innately cinematic about its skyline of tapered high-rises reaching towards the heavens.

The skyscrapers of Shanghai and Hong Kong may be more modern, and those of Dubai and Kuala Lumpur more immense, but only New York's are instantly recognizable architectural icons.

When most people think of New York they think of Manhattan, but there are of course four other boroughs in the city, each made up of countless distinct neighborhoods. The relentless pace of New York life means no neighborhood maintains its identity for too long -- you won't find many Italians in Little Italy these days.

Watch Candace Bushnell take My City_My Life on a tour of New York. »

It also means that the latest "in" place will soon be "out", giving way to the newest up-and-coming neighborhood known by a suitably convoluted acronym -- whether its Soho (South of the Hudson), Tribeca (Triangle Below Canal Street), Sobro (South Bronx) or Dumbo (Down Under the Manhattan Bridge Overpass).

While Manhattan is still the beating heart of the city, rents there are beyond the reach of most New Yorkers, and the relentless tide of gentrification has flowed into the other boroughs. Where New York was once known for its mean streets, mayors Giuliani and Bloomberg have cleaned up the city with their zero-tolerance approach to crime.

The city's murder rate is now a quarter that of the early 1990s, the height of New York's crack epidemic. While no one would complain about that, some feel that recent noise laws and bans on smoking indoors and serving trans fats in restaurants are signs that the city is losing the edginess on which it always thrived.

The last century may have belonged to New York, but the world is changing. London is staking a claim as the world's financial capital, with Singapore and Hong Kong close behind. And while the Big Apple practically invented the idea of "cool," cities like Berlin and Moscow are building a reputation as hipper, grittier alternatives, where the real underground action happens.

But New Yorkers love competition. They're the reason the city bounced back from 9/11, the Great Depression and various Wall Street crises. They put up with the noise, crowds and the astronomical rents because they know there's nowhere on Earth that can match New York for sheer excitement. It's still the city where anything is possible and, for hopeful dreamers around the world, it's still the Promised Land, where anyone can be anything they want.