Make the most of Manila's chaotic charm

(CNN) -- Manila often gets a bad rap, derided as dirty, chaotic, and an incoherent mess of unfinished urban areas and slums. 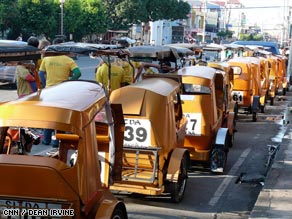 Navigate the city's streets and discover the many faces of Manila.

It's a world away from carefully planned Asian cities like Singapore -- which makes it perfectly suited for visitors who don't need their lives hermetically sealed in air-conditioned shininess.

Manila is alive with a mix of cultures, from Spain, China and the numerous Philippines islands. Sights to gawp at are thin on the ground, but the city streets have enough going on to enthrall even the most disinterested visitor.

Though it was bombed to bits during the Second World War, Intramuros is one of the most coherent areas of the city. Worth a morning's visit, the old walled city's buildings (or rather what was left of them) were left untouched, even when the area was given an update in the 1980s. But it still retains a unique atmosphere in a city where the capital's expanding population is reflected in its growing sprawl.

The Manila Cathedral was one of the buildings pummeled in the war, but the rebuilt version is faithful to the original 16th-century edifice. Fort Santiago, once the guarding fortress of the city and the Pasig River, is now a war memorial. Nearby is Rizal Park, a green spot named after the national hero. What he would have made of the moat outside the old city's walls being made into a golf course is anybody's guess.

Taxis are the best way to negotiate the city, and they're cheap and plentiful, but it's worth jumping into the back of a crazily colorful jeepney at least once, just for the experience.

Regardless of the means, head towards the towers of Makati, one of the more central areas that make up Metro Manila. Home to big businesses and major hotels that may make you feel like you're in Singapore, if you're there on a Saturday make sure you wander through Salcedo Market. It's an upmarket affair, relatively speaking, where you can grab some great local food and produce. Those hankering for excellent western food and a glimpse of Manila's long-lunching business-types should head to Apartment 1B on Lafayette Square.

While you're never far from an urban vignette that contrasts with the central business district's gloss, it's best to plunge into another area of the city for more local color and flavor. A taxi ride away is Marikina City, home to some uniquely Manilan attractions.

Once the shoe-making capital of the capital, you'll find Marikina Shoe Museum here. But it doesn't house just any old shoes. No, it's basically a celebration of the shoes of Imelda Marcos, the country's former first lady, who still deeply divides opinions among Filipinos. A bit kitsch, a bit weird, with over 605 pairs of her footwear (size eight and a half, if you must know) and a selection of photos of the former first lady with world leaders, complete with hilariously obsequious captions, it's a sight to behold.

Snap back to reality with a moto-taxi ride to Marikina City's market. The covered lanes are a hive of stalls and intriguing local life. Heading back towards the central area of the city and Manila Bay, visit Cubao Expo. Located just off General Romulo Street it was formerly Marikina Shoe Expo, a mix of shoe outlets for nearby factories.

Now the low-rise complex of boutiques, bars, galleries and antique shops has to be a contender for hippest spot in Manila, a city that doesn't bother itself too much with anything so affected. Relaxed and fun, it's a great place to while away a few hours. When the shops there close you can get some great local, homemade food, down a cocktail or Red Horse lager or two, and wind down away from the chaos of the streets and plot some evening entertainment.

Later on, head to Makati, one of the main areas for bars of varying descriptions and clientele. saGuijo Cafe + Bar is one of the city's best for music. Attracting typically exuberant Manilan crowds, like all good live music venues it's got a comforting, grimy edge. It hosts bands playing all sorts of music, and, rare for Filipino bands, no covers. To push on through to the morning light, Embassy in Fort Bonifacio is the club with the most in-crowd hipsters queuing to get in.

What are your favorite spots in Manila? Tell us using the Sound Off box below.