BEIJING, China (CNN) -- Travelers to China who display flu-like symptoms may be randomly quarantined over concerns of the swine flu virus, the U.S. State Department warned. 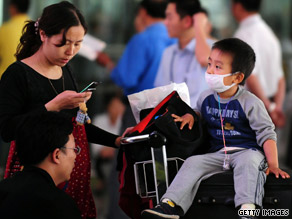 A child traveling with his parents wears a face mask after they arrive at the Beijing, China, airport.

There have been cases of children being separated from parents after either tested positive for the virus, also known as H1N1, a travel alert said Friday.

Chinese officials may give medications to minors in such cases without consulting their parents, according to the alert.

"Although the proportion of arriving Americans being quarantined remains low, the random nature of the selection process increases the uncertainty surrounding travel to China," the alert said.

Swine flu is a respiratory disease of pigs transmitted to humans and caused by type A influenza virus. Symptoms include fever, lethargy, lack of appetite and coughing.

There have been about 48,000 confirmed cases worldwide, including 519 in China, according to the World Health Organization.

The Chinese government has taken measures to stop the spread of the virus. They include placing passengers who have fever or flu-like symptoms on a seven-day quarantine, the alert said.

Others facing quarantine include those sitting close to travelers with symptoms, those with elevated temperatures and those from areas where virus outbreaks have occurred.

A 15-year-old from Topeka, Kansas, told CNN on Monday that she was quarantined in Beijing for a week.

"Apparently, I was sitting too close to a man who had a fever on the 14-hour plane ride," Kaitlin Hannigan said, adding that she initially thought she had a fever, but her temperature was fine when officials checked it.

A day after she arrived in Beijing with an educational group, government officials showed up at her hotel.

"They were wearing quarantine suits, goggles and masks and, like, full body suits and gloves, and said I had to be quarantined for seven days because I came in contact with that guy," Hannigan said.

Earlier in June, New Orleans, Louisiana, Mayor Ray Nagin was quarantined in Shanghai after possible exposure to the virus.

Nagin was headed to Australia on an economic development trip when he was quarantined for four days after sitting beside a passenger who was being treated for suspected swine flu symptoms. Nagin showed no signs of illness.

State officials warned Americans traveling to China that they have to follow local quarantines procedures.

"The U.S. Embassy will be unable to influence the duration of stay in quarantine for affected travelers," the statement said.

The travel alert expires in September.

All About Swine Flu • China