ATLANTA, Georgia (CNN) -- Every year, I take at least one vacation out of the country to get my international travel fix. And this time, I'm taking you with me. 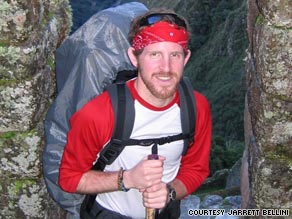 The travel bug is a forever-itch that leaves you longing to wake up in a foreign country, Jarrett Bellini says.

No, not literally. Sit down. This year, YOU can weigh in on where I go and what I do once I get there. We're calling it: Let's Ruin Jarrett's Vacation!

By adding your comments below or sharing your ideas on CNN.com Live's Facebook page, you can send me to either Argentina, Greece, South Africa or Turkey. The destination that gets the most positive response is where I'll go. And to make it more fun, I won't even find out where I'm heading until I actually get to the airport this Sunday, August 30.

There, I will tear open an envelope, read the results for the first time, and then head to my departure gate -- hopefully with at least a few articles of appropriate clothing.

Once I get to wherever it is you send me, I'll be blogging on CNN.com and and checking in from time to time on CNN.com Live. By sharing your ideas on Facebook, you'll be able to guide many aspects of this vacation. You call the shots. And I'll cry myself to sleep at night wondering why I agreed to work on vacation and let other people plan it.

I suppose, now, you might want a little background on why I'd actually want to do this. I mean, besides the fact that clearly, I'm a glutton for punishment. Really, though, I think I just like a challenge.

In the fall of 2003, after an entire month of fruitlessly waiting by my phone to hear back about an entry-level position with CNN, I finally gave up hope and took my apparent job snub as some sort of cosmic sign from the Slacker Gods.

I decided, then, that the only reasonable course of action was to buy a plane ticket to Europe to spend the next three months running around with my backpack, trying -- again, quite fruitlessly -- to meet foreign chicks.

Though not quite a rucksack Casanova, I did come back from these magical three months with a far greater ability to entertain myself in a completely new place among absolute strangers. (Granted, for me, this can be accomplished by the presence of shiny objects.)

Amazingly, the day after I returned from Europe, CNN called and offered me the position. It took four long months, but the timing was remarkable and I couldn't have been happier.

But, as I started my new professional life, I was sick. I had the travel bug. Now, this is not to be confused with bed bugs, which, FYI, I painfully fell victim to in Copenhagen at a horrible, bomb-shelter-of-a-hostel they call Sleep in Heaven. Apparently, Heaven smells like mildew and leaves you with a rash.

No, this was the travel bug -- the forever-itch that leaves you longing to wake up in a foreign bed in a foreign country, rising to face new ideas and new people beneath an unfamiliar sky.

Of course, that's just my poorly poetic way of saying: The world is huge and amazing. It's so good! Once it hits your lips, it's so good!