Why 2010 will be the year of the travel deal

(Tribune Media Services) -- If you thought the travel bargains were unbelievable this year, just wait until 2010. 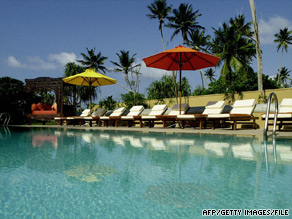 I'm fully aware that this prediction flies in the face of conventional wisdom. I mean, how many travel experts have you seen on TV lately, warning that the deals are going, going, gone?

They're everywhere. But they're probably wrong.

A recent forecast by Mintel, an international market and consumer research firm, predicts travel sales will basically remain flat in 2010 (they fell a projected 2.2 percent, to $123 billion, this year). However, air travel and hotel sales will drop by roughly 2 percent each, it says.

Research by Deloitte & Touche paints an equally bright outlook for bargain-hunters. "Leisure travelers will continue to seek out specials in 2010," says analyst Adam Weissenberg. "With hotels fighting to hold their rates as much as possible, they may offer an additional free night, complimentary spa treatment or discounted meals. For its part, the airline industry is also boosting incentives for leisure travelers by offering such things as a monthly pass."

In case you're wondering why the deals will probably continue through next year, industry guru Peter Yesawich of Y Partnership has an answer: According to his research, just over half of all active travelers say they plan to "stay fewer nights" on an upcoming vacation than they did this year. The implications are of "considerable concern" to the travel industry, he says, because they could push prices lower.

I realize nobody knows the future, and predicting travel prices is a fool's game. Still, it seems to me the real question isn't whether there will be more deals, but where they'll be.

Here are 10 places to find them during the Year of the Deal.

If you come across a hotel or cruise line that insists it "never" discounts, don't believe it. In 2010, everyone will discount. It's just a question of how much. Amanda Sundt, the chief marketing officer at the adventure travel site iExplore, says upscale resorts will continue to offer spa and dining credits and two-for-ones. Worse, hotel capacity is expected to grow as major chains like Hyatt and Four Seasons open new properties. "Look for good introductory deals as the hoteliers want to start seeing an immediate return and build buzz about the new properties," she says.

The travel industry's soothsayers want you to believe that airfares are on the verge of taking off again. They may be right. But they probably aren't. Chris Lopinto, the president and co-founder of Expertflyer.com, says lackluster demand from leisure travelers will continue to keep fares low. In fact, he predicts fares will stay depressed until business travelers jump back into the game. "I think once business and business travel picks up again, we'll see air prices go significantly higher," he says. When? Maybe by the fall of 2010. Then again, maybe not.

Resorts offer so-called "value" season during off-peak times to lure guests. Guess what? Those value prices could last all of 2010, according to hoteliers like Steve Heydt, president of Elite Island Resorts, one of the largest independent Caribbean hotel groups. "Resort business is not showing any measurable increase," he told me.

"We've responded to this trend by ensuring that we allow our current value pricing to roll over and be available next spring, summer and fall. This is the only way we believe we can stimulate advance vacation bookings."

"Wave" period, which happens early in the year, is the time when most cruises are booked. In 2010, they'll be giving them away, from the sounds of it. "Cruise lines are putting the brakes on new ship builds, and those under construction are still being built, but most of those on the drawing board are on hold," says Danny Borg, a partner for the discount travel site Undercover Tourist. "The cruise lines will continue to lower prices until their ships sail at capacity." He and other experts recommend booking early in 2010, which is when all the sales are likely to happen.

"Social media has quickly become a new sales and loyalty channel for airlines," says Lufthansa spokeswoman Jennifer Urbaniak. Her airline sees social media as a way to offer special Internet-only discounts on tickets next year -- and she expects other airlines to do the same.

6. Go where the crowds don't

"The problem we are battling now is perception," says Robert Tuchman, an executive vice president at New York-based event planner Premiere Corporate. "Companies don't want to seem like they are being extravagant, so they are making employees fly coach and not business or first." That's translating into bargains just where you wouldn't expect them: in business- and first-class fares and at upscale resorts.

How much deeper? A lot. I asked Clem Bason, president of Hotwire, and he's looking for "sharply discounted deals" -- both on the kind of opaque deals his site offers (those are ones where the name of the resort isn't revealed until you book) and vacation packages. Archrival Priceline.com also offers opaque deals, but most of the major online agencies, including Expedia, Orbitz and Travelocity, have aggressively discounted packages that promise to be even more aggressively discounted in coming months.

8. Look for an all-inclusive rate

Many travel companies plan to make up for lost revenue by "unbundling" their rates -- meaning they'll separate the base fares and rates from "extras" like the ability to make a confirmed seat reservation or get a newspaper delivered to your room in the morning. "The trend towards a la carte pricing will definitely continue in 2010," says Todd Dirks, a vice president at WNS, a business process outsourcing company. "Airlines have found this to be a material and sustainable source of revenue."

Just one problem: The reservations systems can't handle these fees, so customers don't find out about them until it's too late. Lesson? Look for a rate that includes everything (Southwest Airlines is one of the few carriers that doesn't nickel and dime customers).

9. Zig when everyone else zags

A bargain-hunter's natural instinct is to look for a deal where the deals are known to be. In 2010, they'll be there -- and elsewhere, predicts Elie Seidman, the chief executive of Oyster Hotel Reviews. Take New York City, for example. "Rooms at the Trump Hotel in Las Vegas would cost $500 a night if it were in Midtown Manhattan, but these days, they're often going for less than $100 a night," he says. "Prices in Las Vegas will go even lower when City Centre opens at the end of the year. And if the Fontainebleau in Vegas is able to get out of its current problems, Las Vegas will get even cheaper for tourists." People don't normally associate these destinations with bargain rooms. But that's the thing about 2010 -- whether you follow the crowd or not, you can't lose.

10. You don't even need to spend real money for these deals

Some of the most attractive offers in 2010 may be related to your award miles, according to Chris Barnard, president of Points.com. That's because travel companies are trying to unload as many miles as possible. "In order to increase their value to travelers, program operators are adding new and different redemption options -- everything from restaurant and retail gift cards to program-sanctioned mileage trades," he says.

Next time someone tells you to hurry up and book now, ask yourself: Why are they pressuring you to make a purchase this second? What do they have to gain from it?

Remember, next year will be filled with travel bargains, if these industry-watchers are right.

And I think they are.