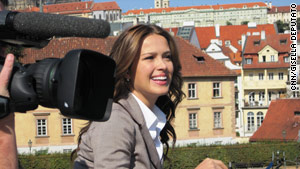 Petra Nemcova told CNN about growing up under communism, surviving the Asian Tsunami and her love for Prague.
STORY HIGHLIGHTS
RELATED TOPICS

Despite her riches, Nemcova, who grew up with few luxuries in communist Czechoslovakia, told CNN that her most important work is her charity, the Happy Hearts Fund.

The model set up the foundation after her near-death experience in the 2004 Asian tsunami. While Nemcova survived by clinging to a palm tree for eight hours, her long-term partner did not.

Here, Nemcova shows CNN around Prague and tells of her love for the "Golden City," what she learnt from growing up in a communist country and how she keeps smiling -- despite life's setbacks.

CNN: Tell us about the first time you came to Prague.

Petra Nemcova: The first time was to visit my aunt and even if Prague is in the same country as my town, it felt like a real journey. For us it was like going somewhere very special, far away, because under the Communist regime you didn't travel that much and Prague was "wow."

I was overwhelmed and amazed by the beauty of Prague and every time I arrive in Prague, even now, I'm still amazed. The lighting at night; the incredible architecture; the details; the history; there was a lot to learn about and a lot to discover. It was a very special experience.

The following time I went to Prague was during my early career in the fashion industry and I was traveling once, twice a week from my town to Prague. I would wake up at 5.45 in the morning, take the bus for one hour, then a tram to school. After school I would take a five-hour train to Prague. So it was quite intense at that time, but it was a great experience and it taught me a lot about being independent.

CNN: How would you describe Prague, in five words?

Petra Nemcova: Prague is a city of romance, of incredible architecture and history. Some people call it the "golden city," some people say it's the heart of Europe -- although maybe the French don't like that very much! Paris is bigger obviously and a bit more hectic and Prague is smaller and has more of a village-y feeling compared to Paris. Prague has more of a calming vibe. It's not rush-rush-rush.

I think when people come here they are surprised by the beauty of Prague and also the vivid colors. I think they may imagine Prague more in gray colors because of the communist association. But since then a lot of reconstruction has been done. Before Prague was shades of grey and black, which was quite mysterious, but now it's more happy and pretty.

In five words it's historical, inspirational, creative, romantic and beautiful.

Petra Nemcova: Growing up in the Czech Republic -- at the time Czechoslovakia -- was a beautiful childhood because I didn't understand the whole concept of communism. I was only 11 when communism fell down and when the Velvet Revolution happened. I had a really beautiful childhood ... I didn't have the great luxury things, we had very little and we counted every penny. But our parents gave us something more valuable than money -- they gave us so much love and that's priceless.

We didn't get the opportunity to travel all over the world and were able to travel only within the communist countries. So we went around our country to see different castles, little towns and I loved it. So that made us richer. It also made us appreciate nature because we spent every weekend in nature. And the values you learn there are priceless too. You don't step on flowers, kick on mushrooms, you really respect nature.

And the value of appreciation came from not having anything and then having a little bit. Having a clementine for Christmas -- it was an incredible joy and every time I smell a clementine, it brings me back to my childhood.

But it was harder for my parents. Because if you weren't part of the system then you didn't get a job and an apartment and it would be really difficult for you. My parents had these passports where every time they would go to these communist meetings they would get a stamp and if you didn't get enough stamps throughout the year, you would get in trouble.

Petra Nemcova: I lost my partner and physically, my pelvis was broken four times, I was drowning many times throughout the experience. There were hard moments throughout that experience and some sweet ones. Seeing the compassion of other people risking their lives for strangers, there was just a lot of love around in that moment. That's what happens actually if you live through disasters, it brings people together, it shows that we are capable of that compassion, but unfortunately it just goes away after some time.

CNN: Tell us about your foundation, Happy Hearts?

Petra Nemcova: Happy Hearts is a foundation that I established after the tsunami. It helps children improve their lives after natural disasters through educational and sustainable initiatives. We build or rebuild a school, add computer labs inside and then we build businesses to sustain the school. The education is really a key not just for the children to recover faster from the disaster but also to help them, their families and communities get out of poverty. We help over 23,000 children a year. We give them hope and not just for them but for their parents and communities. The schools elevate the whole community.

After the tsunami we went to other countries where disasters happened and one of them was in Indonesia. We work with local partners on the ground and have been able to build 33 kindergartens after the 2005 earthquake and that's something incredible because it really changed so many lives.

Our other project is in Peru, where there was an earthquake in 2007 and we have a commitment to build three schools a year.

CNN: If you only had 24 hours in Prague, what would you do?

Petra Nemcova: First of all I would take my friends and family and I would walk around and go to the Charles Bridge because that is my favorite place. Then I would stop by some exhibitions of some new artist. And then I would go and sit down for some tea perhaps at the Musical House. In the evening I may go to a typical Czech pub and afterwards for a concert because I really love them; they put my mind at ease and inspire me.

CNN: How creative is the city?

Petra Nemcova: Many people know about Kafka and some of the other famous writers. But there is a lot of interest in music here and in different types of art. That's perhaps because art was suppressed during communist times and you were only allowed to read certain authors. That's why there is such a hunger now for everything that was forbidden. Not just Czech authors but also a lot of American authors because especially anything from U.S. was big taboo and you could not see any movies and you could not listen to any music. I discovered Stevie Wonder seven years ago and I'm still working on learning and seeing more of the great movies.

CNN: If Prague were a person, who would it be?