(Tribune Media Services -- My ancestors came from Norway, so I'm partial to that corner of Europe. But even if you're not from Viking stock, don't miss the fjords. 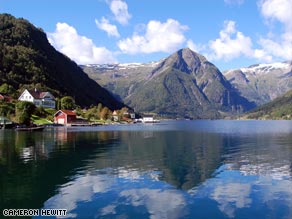 On the Sognefjord, Norway shows off its natural beauty.

From Oslo, northern Europe's most scenic train takes you up and over the country's mountainous spine and into the land of shiplap dreams. The tourist board calls it "Norway in a Nutshell" and that's just what it gives you.

Frankly, if you go to Oslo and don't get out to the fjords, you should have your passport revoked. Norway's greatest claim to scenic fame is its deep and lush saltwater inlets. Sognefjord, Norway's longest (120 miles) and deepest (more than a mile), is tops. Sognefjord offers Norway's best combination of scenic wonder and accessibility.

For the best one-day look at fjords, follow the Nutshell's series of well-organized train, ferry, and bus connections that puts this beautiful fjord country spread-eagle on a scenic platter. Ambitious and energetic travelers can see the whole shebang in a day; with more time or less energy, consider an overnight along the fjord or in Bergen.

Allow about $200 to take the Nutshell route from Oslo to Bergen on your own (cheaper if you have a railpass). Book your reservations for the train at least a week in advance (from the United States, dial 011-47-81 50 08 88). Or you can take a package tour with Fjord Tours for about the same price and less hassle. Sunny July and August are the best months to go.

The Nutshell route starts with a spectacular train ride, leaving Oslo at about 8 a.m. for Bergen. Your camera button will click like a castanet as the train roars over Norway's mountainous spine. The barren, windswept heaths, glaciers, deep forests, countless lakes, and a few rugged ski resorts create a harsh beauty.

The railroad is an amazing engineering feat. Completed in 1909, it's 300 miles long and peaks at 4,266 feet, which, at this Alaskan latitude, is far above the tree line. You'll go under 18 miles of snow sheds, over 300 bridges, and through 200 tunnels in just less than seven hours.

At Myrdal, a 12-mile spur line drops you 2,800 breathtaking feet in 55 minutes to the village of Flaam on Sognefjord. This is a party train. The engineer even stops the train for photographs at a particularly picturesque waterfall.

While most "Norway in a Nutshell" tourists zip immediately from the train onto the scenic fjord boat in Flaam, those with time enjoy an overnight stop on the fjord.

Flaam is a handy tourist depot with several simple hotels. Aurland, a few miles north of Flaam, is more of a town. It's famous for producing some of Norway's sweetest "geitost" -- goat cheese. Aurland has as many goats as people (1,900). Nearly every train arriving in Flaam connects with a bus or boat to Aurland, also on Sognefjord. While nearby Bergen is famous for its rain -- more than six feet a year -- Sognefjord is a relative sun belt, with only two feet of rain a year.

The train from Myrdal to Flaam is quite scenic, but the ride doesn't do the view justice. For the best single day's activity from Flaam, take the train to Berekvam (halfway back up to Myrdal), then hike or bike (rentable from the Flaam tourist office) the gravelly construction road back down to Flaam. Bring a picnic and your camera.

From Flaam, "Nutshellers" catch the most scenic of fjord cruises. Sightseeing boats leave throughout the day. For 90 minutes, camera-clicking tourists scurry on the drool-stained deck like nervous roosters, scratching fitfully for a photo to catch the magic. Waterfalls turn the black-rock cliffs into a bridal fair. You can nearly reach out and touch the sheer, towering walls.

The ride is one of those fine times, like being high on the tip of an Alp, when a warm camaraderie spontaneously combusts among the strangers who came together for the experience. The boat takes you up one narrow arm (Aurlandsfjord) and down the next (Naeroyfjord) to the nothing-to-stop-for town of Gudvangen, where waiting buses shuttle you back to the main train line at Voss. From Voss, carry on into Bergen for a short evening visit.

Bergen, Norway's second city and historic capital, is an entertaining place. You can finish the day there by browsing the touristy but fun wharf area, or zipping up the funicular to the top of 1,000-foot-tall "Mount" Floyen for city and fjord views.

Then spend the night in Bergen -- or, for maximum efficiency, catch the overnight train back to Oslo. Back in Oslo's station, as you yawn and stretch and rummage around for a cup of morning coffee, it'll hit you: You were gone for 24 hours, experienced the fjord wonder of Europe, and saw Bergen to boot.