A 48-hour tasting tour of Istanbul 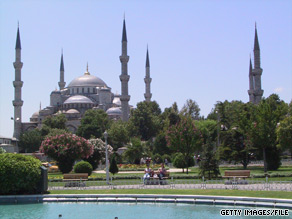 Savor the flavors of Istanbul in between visits to the city's landmarks.

On a street lined with carpet shops near the Arasta Bazaar, Tamara Restaurant (breakfast for two $20), whose owners hail from Turkey's eastern Lake Van area, serves up the region's puffy breads, herb-flecked otlu cheese, and addictive tahini spread. Eggs baked with spicy soujuk sausage might seem like overkill, but order them anyway.

It would be a crime to miss the Süleymaniye Camii mosque, an Ottoman masterpiece; it would be sadder still not to visit the nearby Vefa Bozacisi (boza for two $4). Decked out in weathered marble, this vintage cubbyhole specializes in boza -- a cross between pudding and a beverage, which is made from fermented bulgur. Traditionally it's consumed with leblebi, nutty roasted chickpeas.

Famished after haggling for kilims at the Covered Bazaar? It's worth tracking down Seyhmus (lunch for two $30), a macho kebab dive colonized by gaggles of mustached vendors. Order lahmacun -- wafer-thin lamb-slathered pizza -- with seyhmus kebap (an epic charcoal-grilled lamb patty) and a vegetable salad dressed with pomegranate molasses. Washing your meal down with ayran, a tart yogurt drink, is a sure way to pass for a local.

Unwind with a frosty glass of Efes Pilsen on the rooftop terrace of Seven Hills Hotel (drinks for two $10), which feels like it is suspended between the Blue Mosque and Hagia Sofia against the backdrop of the Marmara Sea.

Even if contemporary Turkish art isn't your cup of çay, visit Istanbul Modern (breakfast for two $45), a museum in a renovated warehouse, for its stylish café and waterfront terrace. With luck, giant cruise ships won't obstruct the postcard-perfect view of the Old Town as you tuck into a breakfast of simit (sesame bread rings), creamy beyaz peynir (feta), crunchy cucumbers, and sour-cherry jam.

Farther along the Bosporus road, stop in the village of Ortaköy for a stroll through craft shops and the neo-Baroque mosque. At Mado (ice cream for two $2), sample the goat's-milk ice cream, which is thickened with the powdered root of wild orchids. Splurge on a triple scoop of pistachio, pomegranate, and black mulberry.

Continue on to Sabanci University Sakip Sabanci Museum, a 19th-century mansion in Emirgan that houses an impressive collection of Ottoman paintings. Espousing a different aesthetic, the museum's Muzedechanga restaurant (lunch for two $98) is noted for its neo-60s interior of unpolished oak and black-leather banquettes. Try the olive oil-braised celery root enlivened with tangerine, and rosy lamb chops, from the smart modern-Mediterranean menu.

Time your visit to Leb-i Derya (drinks for two $16) with the sunset -- and the evening call to prayer. That's when young locals file in for cocktails, like fresh-ginger-and-muddled-lime mojitos, and jockey for steel stools on the open-air terrace overlooking the city's two coastlines and the Bosporus strait in between.

Beyoglu is known for its raucous drinking houses, or meyhane, where meze are an excuse for rivers of raki. The insiders' favorite is Kallavi (dinner for two $50), a brick-walled dining room illuminated by chandeliers that sets the scene for house specials like ficin, a spiced meat pie. The best part? Watching beau monders stomp their heels to the Turkish band's beat. Wait, is that your wife tossing banknotes at the dashing oud player?