(Tribune Media Services) -- Had a problem with your last trip? Fire up your PC and post something online. 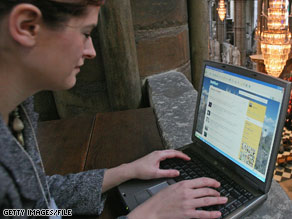 Go on. You just might change the travel industry like Carl Larson did. When he tried to check a regulation-size box on a recent JetBlue flight, an unfriendly ticket agent demanded that he fork over $50.

The reason? The box contained a folding bike.

So Larson blogged about the experience on the Bicycle Transportation Alliance's site, calling the airline's policy "ridiculous." The story was picked up by another blog, bikeportland.org.

Then it made its way onto another site called the Consumerist.

It didn't take long for JetBlue to fold. Not only did the airline refund Larson's $50. It changed its rules, too.

"Customers traveling with folding bikes in a bag that fits within the standard checked bag weights and dimensions will not be charged the bike fee and will be treated like any checked bag," a representative told him.

The travel industry isn't just hip to blogging. In many cases, it takes blogs more seriously than the mainstream media.

"Blogging has a sense of authority and authenticity that other media doesn't have," says Rebecca Goldberg, a hotel design expert and editor-in-chief of Boutique Design magazine.

She's been tracking the influence of bloggers on the hotel industry, and says it grows with each year.

Other travelers -- particularly those booking their hotels online -- feel that blogs are more believable than what they read in a newspaper or watch on TV.

"If I read something in a blog," she says, "it reads more like advice and less like a promotion for the hotel."

How do you become part of the blogging revolution in travel? Here are a few ideas.

Becoming a travel blogger may be easy at first -- all it takes is a computer and an Internet connection -- but it's a lot of work over time. Max Hartshorne, a blogger who edits the travel Web site GoNomad.com says only a few rules apply.

"Don't write blog posts longer than 300 to 400 words, or about four paragraphs," he says. "Make sure the headlines are specific, and aren't misleading. Post at least three to five times a week -- or don't bother."

Travel blogging takes some discipline, but if you feel as if you've got something to say, Hartshorne says you should get started now.

There are tens of thousands of well-read general travel blogs. But focus on a single topic, like renting cars or visiting a particular destination, and you're off to the races, say experts.

Become an expert, so that when people read you, they'll come away with the feeling that you believe in what you're talking about.

Don't be shy about telling your audience what you think about a particular travel product or experience.

Feedback -- both positive and negative -- is often welcome not just by readers, but travel companies.

"I'd recommend that bloggers take the opportunity to be a key resource for companies looking to enhance their service by providing fast and fresh feedback," says Joe Poulin, chief executive of Luxury Retreats, a villa rental company.

"Think about what you would want to know about a foreign city or country before traveling for the first time and incorporate those details in your blog," says Reggie Miller, the chief executive of Iced Media, a New York City-based online marketing and research agency.

He says travel blogs can serve as both a glimpse into your own travels and offer a service to fellow travelers who are looking for advice on their next trip. "Details are key," he adds. "The more information without getting too wordy, the better."

One of the things that set bloggers apart from mainstream-media types like me is that they write in a more informal, conversational style.

They also tell it like it is without worrying about upsetting an advertiser or source. "Be honest and write about a subject or destination that you are passionate about," says Jason Sarracini, who blogs at Tripquips.com.

"The best teachers are ones that are passionate about their subject -- and the same applies to bloggers."

A blog may not be a newspaper, but some of the rules of journalism should still be considered, if not followed.

For example, if you're slamming an airline or resort, think about asking your subject for a comment.

"If you did not like a certain aspect from your travel experience ask a decision-maker to provide details on why or why not," says Katena Carvajales, the media-relations manager at Hartsfield-Jackson Atlanta International Airport.

"That will give their reader an opportunity to make the decision on their own." (That assumes, of course, that the company will take questions from a blogger -- some don't.)

The most effective blogs don't just use the written word, but also audio and video, to convey their message.

"The video blog from our last intern, Pat Blute, was great because people got to actually see Pat in the Galapagos and watch him skydiving in Australia rather than just read about his experience," says Kristen Celko, the company's vice president of marketing and ecommerce.

With just a little know-how, perspective and honesty, you can join the blogging revolution in travel. But maybe the best part about a Web log -- other than that almost anyone can do it -- is its potential to improve the travel experience.

It's about time. Those of us who had the power to push for change, the folks who reported for the established media, have fallen asleep on the job for the most part.

We've become tired and complacent, cozying up to our advertisers and rarely writing a critical word about an industry that has forgotten the meaning of customer service. For us, blogging is a long overdue wake-up call.

Christopher Elliott is the ombudsman for National Geographic Traveler magazine. This column originally appeared on MSNBC.com. You can read moretravel tips on his blog, elliott.org or e-mail him at celliott@ngs.org.

All About Blogs and Blogging • Travel and Tourism • Air Travel