10 things every traveler should do

(REAL SIMPLE) -- Visiting a new town is like having a conversation. Places ask questions of you just as searchingly as you question them. And, as in any conversation, it helps to listen with an open mind, so you can be led somewhere unexpected. The more you leave assumptions at home, I've found, the better you can hear whatever it is that a destination is trying to say to you. 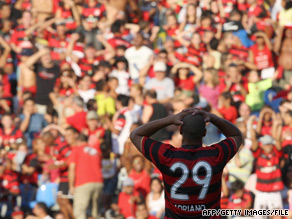 Watching soccer in Rio de Janeiro, Brazil, will be nothing like attending a game at home.

While in Venice a few months ago, I asked myself (and it) whether its art stood in the way of other things, like modernity and convenience. And with each turn I took, Venice asked me why I didn't just accept its art for what it was.

Returning to Tibet a few years ago, I wondered whether its magic was in the land or in my head. I haven't quite worked it out, but asking the question made me more focused while there and led to deeper questions that I'm still asking back at home.

With that in mind, here are the things that I always do in a new place to set the conversation in motion.

Savor every moment of your first few hours

First impressions really are worth a thousand others. I often scribble a hundred pages of notes when I visit somewhere new. But then, when I get home, it's always the first page or two -- the taxi ride in from the airport, my first foray out onto the streets -- that captures something vivid and essential before my ideas and prejudices begin to harden.

So stay away from e-mail, the news and anything that reminds you of home and just soak the place in. Real Simple: Sneaky travel fees

Embrace the prospect of being a tourist

Some snooty types will tell you that they're "travelers," not tourists. But if being a tourist means wanting to see all the attractions that make a town unique, then what's so bad about that?

Take the three-hour city tour on your first day in Atlanta so you know where things are and what you wish to return to. When traveling abroad, visit the shops recommended by tour guides, if only to see what's available from people who speak English. Don't be shy about asking a local stranger how to find the national museum; she may just offer you a guided tour along the way.

Don't ignore the glossy magazines placed on your desk or lists of sightseeing activities in the guest-services brochure. How else would I have known that Baltimore is home to the unique and haunting American Visionary Art Museum? Or that I could walk with lions in Mauritius?

Where else could I have found out that there are six different kinds of operator-assisted phone calls in Bhutan -- Urgent, Lightning, Distress, Important, Immediate and Most Immediate -- and they all seem to be treated about the same?

Run an errand for a friend

She's asked you to get, say, macadamia popcorn on Maui or to track down that wise monk she once met in Phnom Penh. The very search for what someone else wants or values (and it doesn't really matter what it is) will lead you to places you would otherwise never see. Real Simple: Out-of-the-ordinary travel ideas

Take in a performance or a sporting event

A ball game or a symphony is transporting and doesn't require you to speak the language. And watching opera in Beijing or soccer in Rio will be nothing like seeing opera or soccer at home. It would take a mighty effort to get me to "Swan Lake" in Santa Barbara. But put me in Beirut and I know it will be a night to remember.

Check out a bookstore

It's a great way to learn about the interests of the locals. On almost any street in New Delhi, for example, a bookshop is bulging with works on palaces, textiles, spirituality and the Kama Sutra; in Salt Lake City, the offerings are somewhat different.

And in a store like the independent-minded Elliott Bay Book Company, a local institution in Seattle, you'll find a universe so compendious that it seems to be an anthology of the city's distinctive grace notes. Poking into even the smallest of these places not only opens a new door to a city but also offers the promise of a good read to keep you company at night.

Ride a bus to the end of the line

It isn't wise to do this everywhere, but riding the bus to even the next six stops can be useful. At the very least, you'll see something of the city, get a front-seat view (literally) of what the Romans do in Rome and end up in surprising destinations. I did this in Miami once and found myself in a spicy part of Little Havana that nobody would have mistaken for South Beach, and yet it seemed to capture the essence of the city.

Almost every big city anywhere has an English-language paper, and even papers you can't read will startle you with their pictures and their different types of tiny print. Whether it's pages of "matrimonial" ads in The Times of India or headlines in the Key West Citizen (300-POUND MAN SMASHES HEAD IN WALL), newspapers always tell you much more about a place than they think they're telling.

In Kyoto, you could see chicken tatsuta burgers, corn-potage soup and, in autumn, moon-viewing burgers on the menu, and your fellow diners might be dressed in Vivienne Westwood or Dior. In Bolivia, the McDonald's I visited was so exotic that society ladies sipped their McCoffees under the watchful eye of a security guard.

Even in Manhattan, the Big Mac outlet I stumbled into one morning at 3 a.m. was home to an unexpected but very New Yawky kind of camaraderie. The food is cheap and semipredictable, of course, but it's all the ways in which the place is surprising that you will take home with you. What else are we looking for in travel (and in love and in life) but a tasty mix of the strange and the familiar?

Get lost. (In the nicest sense.)

Pico Iyer has written nine books, including "Video Night in Kathmandu" and "The Open Road," a record of his 34 years of talks and travels with the 14th Dalai Lama. He lives in rural Japan and Santa Barbara, California, with his longtime sweetheart.