Flight fight: Should kids be banned from first class?

(Tribune Media Services) -- The most embarrassing moment of my life? That's easy. 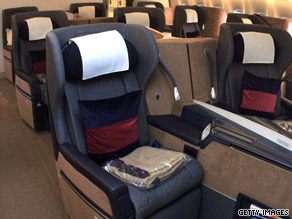 One poll showed an overwhelming majority of air travelers want families with kids put in a separate section.

Our son, Aren, had just turned one and we were flying from New York to London on an airline whose name I've promised never to mention.

We'd managed to score an upgrade -- seats 1A and 1B -- and to ensure Aren had a pleasant trip, we offered him a nip of Benadryl. Most kids fall asleep when they're given an antihistamine.

The medication had the exact opposite effect: Aren turned hyper, tearing down the aisle of the first-class cabin, shrieking and bumping other passengers. He woke up the person sitting next to us and drooled on the passenger behind us.

All of which brings me to the issue at hand: Kids in first class. Should we or shouldn't we? And if so, when?

Allow me to state my completely unbiased opinion right up front. No. We should not. At least not mine. I downgraded myself on the flight home, that's how badly I felt for the other London-bound passengers that day.

What was I thinking, trying to bring a toddler into first class?

An overwhelming majority of air travelers to a recent survey by Skytrax -- 9 in 10 respondents -- said families with children should be seated in a separate section on flights, presumably not in first class.

Another poll by corporate travel agency Carlson Wagonlit found that business travelers, who are most frequently found in the business- and first-class cabins, believe crying babies are the second-most annoying aspect of air travel. The first? Air travelers who carry too much luggage on board.

Several years ago, a United Airlines flight attendant just came out and said it: no children in first class. A passenger disagreed, sued the airline -- and lost.

In my last column, we argued about whether kids belong on planes, and resolved that although many of us would like to keep the little ones from flying, it's just not practical. Now, we're having a more nuanced and civil discussion about children in the good seats.

Well, sort of. I asked some of my readers for their opinions of kids in first and got an earful.

"No, no, no, no, no," says Mona Palmer, an administrative assistant from Friendswood, Texas. "First-class tickets are too expensive to have the investment destroyed by an unruly kid whose parents think they've paid for the privilege of ignoring their kids' rotten behavior."

The other side of this argument is equally vehement.

"Give me a break," says Jennifer Thomas, a mom who describes herself as the owner of a public relations firm. "These questions about kids and flying are frankly disrespectful. Let's see, kids in first class or terrorists allowed to fly on planes? Or how about just plain rude adults who take to the friendly skies? I would take a child any day over previously mentioned. Why not ask questions about those two audiences?"

Kids! Kids! Can't we just get along?

Instead of spending the rest of this story fighting (as entertaining as that might be to some of you, dear readers) let's instead focus on three solutions to this problem.

No children in first class

One of the most persuasive arguments for limiting first class to adults is that the premium cabin is essentially an adult product. Which is to say, it's difficult for a youngster to appreciate a wine list or a gourmet meal. It's just no place for kids. Plus, it's pricey -- even if you're using miles to upgrade.

Rosanne Skopp, a grandmother who says she "really loves kids," puts it this way: "If I'm going to be sitting next to a screaming baby, at least let me feel good that I haven't paid for a first-class ticket, only to be tortured."

No airline that I'm aware of has banned children from first class or business class, but it wouldn't be accurate to say any of them have opened their arms wide to their junior passengers, either. Like a five-star restaurant or a luxury resort, the first-class cabin is not particularly welcoming to young fliers. Or, for that matter, their parents.

Here's another suggestion: If we can't ban minors, then let's at least prevent the littlest passengers from sitting "up front." Babies and toddlers are too disruptive to the other passengers, who are paying a premium for their seats.

"No one under 12 should be in first class," says Richard French, an anesthesiologist from Christchurch, New Zealand, who by way of full disclosure, is himself a father.

"I pick that age because kids are essentially self-caring by that age and that is the age that airlines start charging an adult fare. It is really depressing when you have treated yourself to a very expensive fare, to have a 3-year-old running up and down the aisle."

I can't argue with that. During my research for this story, I heard whispers that several international airlines had informal age-limit policies for first-class passengers, but they were difficult to confirm.

The overwhelming number of travelers I spoke with said kids should be able to fly in first class if their parents could afford to pay the freight. But they were quick to add that they expected the children to behave.

"Of course children should be allowed in business- or first class," says Frank Nowicki, a retiree from Winter Haven, Florida. "As long as the parents have raised their children properly -- as far as behavior goes -- there should never be a problem on a flight."

Still, Nowicki admits that's not always possible, and has seen "many occasions" when parents have allowed their offspring to run wild on a flight. "Don't blame the children," he says. "Blame the adults for their permissive ways and their lack of parenting skills."

But how do you mandate good parenting on a plane? A multiple-choice quiz? Social references? Even peer pressure -- dirty looks and all -- isn't always enough to stop these indulgent parents from boarding a flight, or buying an upgrade for their brood.

I'm afraid this is one of those instances when new rules and regulations, even with the best of intentions, would not end the problem of disruptive kids in first class. This is ultimately a parent's decision that the entire first-class cabin must live with.

But before buying a premium ticket, here are a few useful questions to answer: Can my child behave like a first-class passenger? If not, do I have the parenting skills to contain a meltdown? Is it really worth the hassle -- not to mention the money?

I've already answered those questions. My son Aren, who today is a reasonably well-mannered first-grader, now has two siblings: a 4-year-old brother with a penchant for practical jokes and a slightly hyperactive 2-year-old sister. Even if I could, I would never inflict them on another first-class passenger. Ever.

But if you think your kids can do better, I have just four words for you: Welcome to first class!

All About Travel and Tourism • Family Travel