CHICAGO, Illinois (CNN) -- One of Chicago's most well-known real estate moguls appears to have shot himself to death, police said. 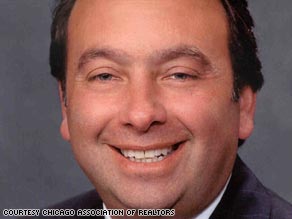 The body of Steven L. Good was found in his Jaguar on Monday. The car was spotted in a parking lot of a wildlife preserve in Kane County, Illinois, just outside Chicago, authorities said.

No note was found, and police say they do not know how long the 52-year-old had been in the vehicle.

The death comes amid great turmoil in the country's real estate industry. In his role as chairman of the Realtors Commercial Alliance Committee, Good commented on tough conditions last month at a business conference.

On a memorial blog set up by the Chicago Association of Realtors, for which Good once served as president, friends and colleagues described him as a gregarious man with a big personality. He was a savvy businessman who built his company into a major national real estate company that did deals with Donald Trump, they said.

"The guy was a true blue Realtor," said Barbara Matthopoulos, the association's spokeswoman.

She was new to real estate when she met Good more than a year ago. He took time to give her advice that has helped her grow to love the business.

"Anybody who knew him would speak to his leadership, his generosity, his attitude. The guy was just very positive, always smiling, always telling you a story. He was engaged. Everyone is really very shocked," she said. "I doubt anyone could help explain why this happened."

Kane County Sheriff's Department spokesman Lt. Pat Gengler said authorities don't have any "concrete evidence if this had anything to do with his finances."

The company was founded by Good's father, Sheldon Good, in 1965, according to the firm's Web site.

Steven Good had "been involved in the sale of more than $4 billion of real estate, including commercial, office, retail, industrial, residential, and vacant land sites," it says.

"Mr. Good is the driving force behind the expansion of the company, which has been ranked as the largest firm in the United States exclusively conducting real estate auctions."

Good, who was also an attorney, wrote a book, "Churches, Jails and Gold Mines: Mega-Deals From a Real Estate Maverick." According to Amazon.com, Donald Trump wrote the afterword.

The first chapter begins, "Our auction company is to the real estate business what Sotheby's and Christie's is the fine art and collectibles business." The book goes to say that as of its 2003 publication, the firm had sold 40,000 properties totaling $8 billion.

"If you lined up 1,000 people and said pick the one that might do this to themselves, he would be the last person I would choose," said Wayne Caplan, who worked at Sheldon Good for six years and knew Steven Good personally. "He had a zest for life. He has a wife and kids and he had so much in his life."

All About Chicago • Real Estate