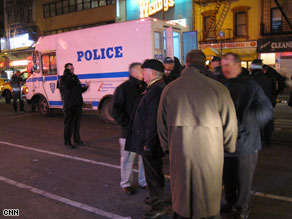 In a statement, the NYPD said the officers were injured when trying to break up a fight between two demonstrators.

"While attempting to separate the males, several others joined in and began to assault the officers," the statement said.

The demonstrators had gathered on Manhattan's West Side on Sunday afternoon to protest the Israeli incursion in Gaza. The rally began peacefully, but skirmishes between police and demonstrators eventually broke out, witnesses said. iReport.com: Hundreds march, shout at rally

Steve Sherman, coordinator of security for United for Peace and Justice and a demonstrator at the rally, said police maced demonstrators.

Mike Eilenfeldt, another demonstrator, said confrontations between the police and protesters appeared to escalate after a police officer had fallen to the ground.

"He's laying on the street, and from that point on it's a police riot where they start attacking the young people," Eilenfeldt told CNN.

Police denied the allegations of mace being used on protesters.