WASHINGTON (CNN) -- A Bush administration official has publicly described a detainee's treatment at the U.S. Navy Base at Guantanamo Bay, Cuba, as torture, according to a published report. 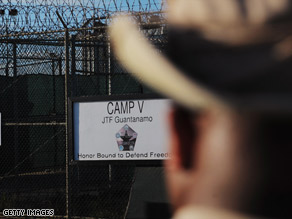 The detention of terror suspects at Guantanamo Bay, Cuba, has been a source of controversy.

Susan Crawford, the retired judge in charge of determining which Guantanamo detainees should be tried by a U.S. military commision, has refused to refer the case of Mohammed al-Qahtani to prosecutors because of that assessment, The Washington Post reported Wednesday.

"We tortured (Mohammed al-) Qahtani," Crawford told the Post. "His treatment met the legal definition of torture. And that's why I did not refer the case" for prosecution.

Military prosecutors have accused al-Qahtani of helping to plan the September 11, 2001, terror attacks, and believe he may have sought to participate, possibly as the "20th hijacker."

The United States had been seeking the death penalty against al-Qahtani and five other men in connection with the 9/11 attacks. Crawford approved charges against the other five.

She told the newspaper she came to her decision based on the combination of the interrogation techniques, their duration and the effect on al-Qahtani's health.

"The techniques they used were all authorized, but the manner in which they applied them was overly aggressive and too persistent," she said.

"You think of torture, you think of some horrendous physical act done to an individual. This was not any one particular act; this was just a combination of things that had a medical impact on him, that hurt his health. It was abusive and uncalled for. And coercive. Clearly coercive. It was that medical impact that pushed me over the edge" to call it torture, she told the paper.

When asked later Wednesday about the report, White House Press Secretary Dana Perino responded, "It has never been the policy of this president or this administration to torture.

"Because of command influence concerns, I have not commented about individual cases from this podium and ... that's as much as I can say about it."

Pressed further on the issue, Perino said, "The commander-in-chief should not be commenting on cases where the government is bringing a case against a detainee. It would be inappropriate to do so from the White House."

The Department of Defense issued a statement Wednesday defending the military treatment of al-Qahtani.

"We have conducted more than a dozen investigations and reviews of our detention operations, including specifically the interrogation of al-Qahtani, the alleged 20th hijacker.

"The investigations concluded the interrogation methods used at Gitmo (Guantanamo), including the special interrogation techniques used with Qahtani in 2002, were lawful.

"However, subsequent to those reviews, the department adopted new and more restrictive policies, and improved oversight procedures for interrogation and detention operations.

"Some of the aggressive questioning techniques used on al-Qahtani, although permissible at the time, are no longer allowed in the updated Army field manual."

In November, military prosecutors said they would try to refile charges against al-Qahtani based on later interrogations that did not use harsh techniques, the paper reported.

Crawford, who dismissed war crimes charges against al-Qahtani in May 2008, said she won't let the prosecutors pursue other charges.

"For 160 days, his only contact was with the interrogators," she said.

Crawford, who studied interrogation and other military records, said al-Qahtani was forced to stand naked in front of a female agent, threatened with a military dog named Zeus, "forced to wear a woman's bra and had a thong placed on his head" during questioning, and "was told that his mother and sister were whores," the newspaper reported.

Al-Qahtani, a Saudi national, was denied entry to the United States by an immigration officer in August 2001, and later was captured in Afghanistan. In January 2002 he was sent to Guantanamo, where he has remained in custody as an enemy combatant.

The agency said it is now focused on ensuring the proper treatment of detainees.

All About Guantanamo Bay • The White House