NEW YORK (CNN) -- Firefighters, sailors and emergency workers reflected Friday on the scenes they witnessed during rescue efforts for the passengers of a US Airways jet that ditched into the Hudson River's frigid waters the day before. 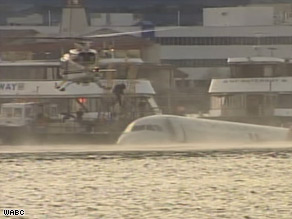 Divers plunge into the icy waters of the Hudson River on Thursday to rescue passengers from the ditched aircraft.

It was far from just another day in New York, a city that has experienced its fair share of emergency calls.

"It was like a movie set," said Tom Sullivan of Firefighter Marine Company 1. "We're at a Marine base, over a computer. Printout says 'Plane crash. Hudson River, over 15th Street.' "

Sullivan rushed to the scene and began working on transporting some of the 155 passengers on US Airways Flight 1549, many of them displaying signs of distress.

"I said 'Welcome to New York,' and a couple of them cracked a smile," he said. "They were just glad to be warm and dry."

Detective Michael Delaney, the head diver for the NYPD Air-Rescue Unit, was lowered into the Hudson River from a helicopter in full scuba gear to rescue a woman hanging onto a floating object in the water.

"She seemed to be at the most distress at the time," Delaney said on CNN's "Lou Dobbs Tonight."

"They put us down to about 10, 15 feet off the water. And that's when we jumped into the water," Delaney said. "Man, I've been in cold water, but nothing like that."

"Our first focus is to get a bit of communication established between us, kind of a game plan," Rodriguez said. "It comes down sometimes to hand signals and a tap on the shoulder, a point of a finger."

The unidentified woman was reluctant to let go of the net she was holding on to but eventually wrapped her arms around her rescuers. She was later treated for hypothermia, Delaney said.

"If there's going to be a victim in the water, this is probably the worst time of year for them to be in the water," Delaney said. "These people were literally in just regular clothes, obviously. They were just taking a flight on an airline and wearing a sweater, maybe some jeans, some sneakers."

Petty Officer Von Rankin recalled sailing alongside the airplane over icy waters to rescue passengers, some partially submerged in the near-freezing waters.

"I actually put my boat inside the plane," said Rankin, who was one of the first to arrive at the crash scene.

Rankin and his crew, who plucked seven people out of the wreckage, praised the crews of the fast-moving swarm of commuter ferries that transported many of the passengers away from the sinking aircraft.

Mike Starr, a ferry operations manager, credited a hammock-like maritime rescue tool called a Jason cradle with helping save passengers from the water as quickly as possible.

While Starr was helping people out of the water, he quickly turned his attention to a mother attempting to climb into a raft with her infant.

"She climbed almost all the way up onto the boat," he said. "She didn't have the strength, so we muscled her on. The baby was right back in her arms, and she was back inside real quick."

"You had to maneuver the boat with the current, because the plane is going downriver," Catanzaro told CNN's "Larry King Live." "And you had to make sure there was no one next to you or inside."

Other rescue workers who raced to save passengers also looked back on Thursday's rescue mission in disbelief.

"We heard it was a confirmed plane down. Initially, you think of a small Cessna-type plane, but when we got up on the scene, I saw the tail fin of a US Airways jet out of the water," New York firefighter Tom Sullivan said. "It's unbelievable."

As Sullivan approached the partially submerged aircraft with passengers clustered on its wings, he was struck by the "organized" and "calm" atmosphere of the rescue efforts already underway.

"There's been helicopters that have gone down in the East River the last few years. But to handle this -- this is a large airliner with this many people, it worked out well. I was amazed that no one was killed."