NEW YORK (CNN) -- The missing engine from a US Airways jet that ditched in the Hudson River was recovered Friday, more than a week after the crash landing. 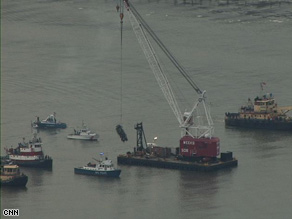 A jet engine lost after Flight 1549 ditched in the Hudson River is hoisted from the water Friday.

Icy conditions and strong currents hampered efforts to locate and raise the plane's left engine, which apparently tore from the Airbus A320 when it hit the water in an emergency landing January 15.

The engine was found Wednesday in about 50 feet of water. The divers who found it reported that it was in one piece, said New Jersey State Police Sgt. Stephen Jones.

A crane brought the engine up Friday afternoon as daylight began to fade. It was placed on a barge and hauled to the New Jersey side of the river, according to a spokeswoman for the U.S. Army Corps of Engineers, which was supervising the recovery.

After an initial examination at the site, the engine will be shipped with the plane's other engine to the manufacturer, where "the NTSB will supervise and direct a complete tear-down of each engine," NTSB spokesman Peter Knudson said.

The right engine was still attached to the plane when it was pulled from the Hudson last week.

It will be at least next week before any information from the initial examination is released, Knudson said.

Investigators said this week that they found a single feather and evidence of "soft-body impact damage" on the aircraft. The find reinforces the pilot's report that the plane was brought down by a flock of birds.

Pilot Chesley B. "Sully" Sullenberger, 58, told investigators that his aircraft struck birds, disabling both engines, about 90 seconds after takeoff from LaGuardia Airport in New York.

The feather, found on a flap track on the wing, was sent to identification experts at the Smithsonian Institution, the National Transportation Safety Board said.

Samples of what appears to be organic material found in the right engine and on the wings and fuselage have been sent to the U.S. Department of Agriculture.

Meanwhile, a pilot program involving "birdstrike avoidance" radar systems will be expanded to include LaGuardia, said a spokesman for the Port Authority of New York and New Jersey.

The Air Force has been using such systems at its bases for years, and last year the Port Authority -- which operates five metropolitan New York airports -- struck an agreement with the Air Force and the Federal Aviation Administration to install the bird-detecting system at John F. Kennedy International Airport.

In the wake of the US Airways crash-landing, that program will be expanded to include LaGuardia and Newark International airports within a few months, according to Pasquale DiFulco, spokesman for the Port Authority.

Newly released video captured seconds after the Airbus A320 ditched in the Hudson River showed passengers trying to flee the aircraft almost immediately after it settled in the water and began to float along the river current.

All 155 crew members and passengers on the plane survived the incident, which Gov. David Paterson dubbed a "miracle on the Hudson."

The video, which the Con Edison utility company released Thursday, first shows a long wake behind the plane before zooming in on the aircraft. Steam surrounds the plane as it floats with a slow counterclockwise twist.

An exit hatch opens on the plane's left side, and several people file out onto one of the plane's wings. Seconds later, an inflatable evacuation ramp extends from the opposite side of the plane.

Passengers run onto the plane's other wing as the aircraft floats off-screen for a few seconds. The camera jerks, and when the plane reappears, passengers can be seen at the bottom of the inflatable ramp.

Some passengers jump into the water, which was a chilly 41 degrees when the plane splashed down on the afternoon of January 15.

Within minutes, a ferry and other boats come into the picture and begin to take the people aboard.

The video came from a surveillance camera at Con Edison's 59th Street Station, a steam plant, spokesman Chris Olert said. A person manning the camera from inside the plant saw the plane hit the water and redirected the camera, Olert said.

All About US Airways Group Inc. • Hudson River