(CNN) -- A former high school cheerleader who sued over injuries caused when a teammate failed to catch her during a routine, lost her appeal before the Wisconsin Supreme Court on Tuesday. 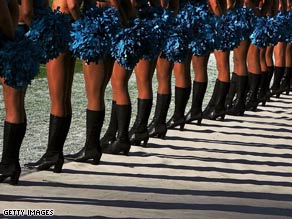 The seven state justices unanimously concluded cheerleading is a "contact" sport, and therefore neither the male student cited nor the school district was liable for damages.

The opinion also said the stunt in question did not create a "compelling danger" to students.

It is the first legal decision of its kind, according to the National Cheer Safety Foundation, a group founded by parents.

The case was closely watched by school districts and parents around the country concerned about whether they would have immunity from lawsuits involving unintentional injuries from certain extracurricular activities.

Brittany Noffke was a varsity cheerleader at Holmen High School, about 14 miles from La Crosse, in western Wisconsin. Her team was practicing a "post to hands" stunt before a basketball game in 2004, and after being lifted up to stand on the shoulders of a fellow student, Noffke fell backward, striking her head on the floor.

The 16-year-old male cheerleader who lifted her, and then was supposed to be a spotter, failed to catch her.

The girl's family sued the boy and the school district, claiming the coach was negligent by not having a second spotter and not providing safety mats.

State law does not specifically spell out which high school activities involve "contact," but they typically involve sports such as football or lacrosse in which opposing teams compete against each other.

But the Wisconsin high court concluded that "cheerleading involves a significant amount of physical contact between cheerleaders that at times results in a forceful interaction between the participants."

Justice Annette Ziegler cited the "spirit rules" of the National Federation of State High School Association's handbook, which contained pictures illustrating various cheerleading stunts. She said all but one photo showed at least two cheerleaders in contact with one another.

Because the male cheerleader just made a mistake by being out of place when Noffke fell, the court found he did not act "recklessly," the only legal standard that would have permitted a lawsuit to proceed.

Although it is not considered a sport at many high schools and colleges, cheerleading has grown increasingly popular over the years, and the stunts have become more complex and dangerous, sports injury experts say.

A University of North Carolina-Chapel Hill study found cheerleading accounted for about two-thirds of some 93 "catastrophic" sports injuries -- including head and neck damage -- among high school girls in the past 26 years. But the study noted that other sports such as football produce far more devastating injuries, though fewer in number.

Cheerleading advocates say the activity has become much safer in the past 15 years, following greater awareness of the risks and better coordination among state and national groups.

The American Association of Cheerleading Coaches and Administrators estimates about 4 million people are involved in the activity.