(CNN) -- Two crew members were taken to a hospital after a FedEx cargo plane crashed on landing Tuesday morning at the Lubbock, Texas, airport, officials said. 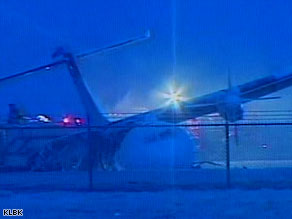 A damaged FedEx ATR-42 lies beside a runway early Tuesday at the Lubbock, Texas, airport.

There was a small fire on the plane, the Federal Aviation Administration and FedEx spokeswoman Sandra Munoz said. Munoz said she was not sure about the extent of the damage.

Munoz said the plane had been traveling from Fort Worth Alliance Airport and skidded off the runway amid light freezing rain. iReport.com: Are you there? Send photos, video

Neither official could immediately say what caused the accident, and Munoz didn't know why parts of the plane caught fire.

The plane was operated by Empire Airways, which is under contract with FedEx Corp., based in Memphis, Tennessee.