(CNN) -- The National Transportation Safety Board said Wednesday that both engines of the US Airways flight that ditched last month into the Hudson River contained bird remains. 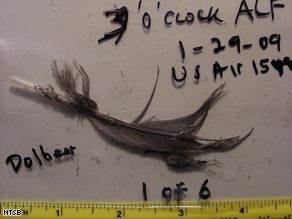 The feather found inside one of the engines of the plane that crashed into the Hudson River.

The engines from US Airways Flight 1549 were sent to the manufacturer in Cincinnati, Ohio, where the NTSB directed the analysis, it said in a news release.

The plane's flight data recorder "revealed no anomalies or malfunctions in either engine up to the point where the captain reported a bird strike, after which there was an uncommanded loss of thrust in both engines," the NTSB said.

The NTSB also said that an "engine surge event" in the right engine on January 13, two days before the accident, was caused by a faulty temperature sensor, which had been replaced.

Investigators said last month they found a single feather and evidence of "soft-body impact damage" on the aircraft. The find reinforces the pilot's report that the plane was brought down by a flock of birds.

The feather, found on a flap track on the wing, was also sent to identification experts at the Smithsonian Institution last month.

The pilot ditched the Airbus A320 in the Hudson River and passengers tried to flee the aircraft almost immediately after it settled in the water and began to float along the river current.

All 155 crew members and passengers on the plane survived the incident, which New York Gov. David Paterson dubbed a "miracle on the Hudson."