WASHINGTON (CNN) -- One week after the U.S. Army announced record suicide rates among its soldiers last year, the service is worried about a spike in possible suicides in the new year. 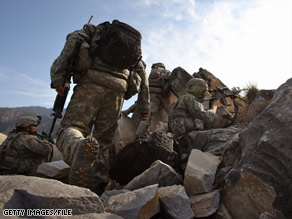 If reports of suicides are confirmed, more soldiers will have taken their lives in January than died in combat.

The Army said 24 soldiers are believed to have committed suicide in January alone -- six times as many as killed themselves in January 2008, according to statistics released Thursday.

The Army said it already has confirmed seven suicides, with 17 additional cases pending that it believes investigators will confirm as suicides for January.

If those prove true, more soldiers will have killed themselves than died in combat last month. According to Pentagon statistics, there were 16 U.S. combat deaths in Afghanistan and Iraq in January.

"This is terrifying," an Army official said. "We do not know what is going on."

Col. Kathy Platoni, chief clinical psychologist for the Army Reserve and National Guard, said that the long, cold months of winter could be a major contributor to the January spike.

"There is more hopelessness and helplessness because everything is so dreary and cold," she said.

But Platoni said she sees the multiple deployments, stigma associated with seeking treatment and the excessive use of anti-depressants as ongoing concerns for mental-health professionals who work with soldiers.

Those who are seeking mental-health care often have their treatment disrupted by deployments. Deployed soldiers also have to deal with the stress of separations from families.

"When people are apart you have infidelity, financial problems, substance abuse and child behavioral problems," Platoni said. "The more deployments, the more it is exacerbated."

Platoni also said that while the military has made a lot of headway in training leaders on how to deal with soldiers who may be suffering from depression or post-traumatic stress disorder, "there is still a huge problem with leadership who shame them when they seek treatment."

The anti-depressants prescribed to soldiers can have side effects that include suicidal thoughts. Those side effects reportedly are more common in people 18 to 24.

Concern about last month's suicide rate was so high, Congress and the Army leadership were briefed. In addition, the Army took the rare step of releasing data for the month rather than waiting to issue it as part of annual statistics at the end of the year.

In January 2008, the Army recorded two confirmed cases of suicides and two other cases it was investigating.

Last week, in releasing the report that showed a record number of suicides in 2008, the Army said it soon will conduct servicewide training to help identify soldiers at risk of suicide.

The program, which will run February 15 through March 15, will include training to recognize behaviors that may lead to suicide and instruction on how to intervene. The Army will follow the training with another teaching program, from March 15 to June 15, focused on suicide prevention at all unit levels.

The 2008 numbers were the highest annual level of suicides among soldiers since the Pentagon began tracking the rate 28 years ago. The Army said 128 soldiers were confirmed to have committed suicide in 2008, and an additional 15 were suspected of having killed themselves. The statistics cover active-duty soldiers and activated National Guard and reserves.

The Army and the National Institute of Mental Health signed an agreement in October to conduct research to identify factors affecting the mental and behavioral health of soldiers and to share strategies to lower the suicide rate. The five-year study will examine active-duty, National Guard and reserve soldiers and their families.