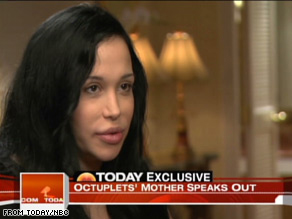 Nadya Suleman, a single mother of 14 children, has set up a Web site asking for donations.

The Web site features pictures of a rainbow, child's blocks and all eight of Suleman's newborns. Also prominently displayed on the Web site is a prompt for visitors to make a donation, noting that the "proud mother of 14" accepts Visa, MasterCard, American Express, Discover and PayPal.

Suleman, 33, had the octuplets through fertility treatments, despite already having six young children and no clear source of income.

In recent television interviews, Suleman has rejected suggestions that she might not be able to care adequately for all 14 of her children.

Watch report on who is paying the bills for the octuplets »

Suleman said she plans to go back to college to pursue a degree in counseling, NBC reported. She also said all 14 children have the same biological father, a sperm donor whom she described as a friend.

Joann Killeen, a spokeswoman for Suleman, has told CNN that she is being deluged with media offers, but disputed any suggestions that Suleman may have had a monetary incentive for having so many children.

Killeen, told CNN's "Larry King Live" that Suleman "has no plans on being a welfare mom and really wants to look at every opportunity that she can to make sure she can provide financially for the 14 children she's responsible for now."

Suleman's publicist did say that Suleman gets $490 every month in food stamps.