(CNN) -- Sonic booms and at least one fireball in the sky were reported in Texas on Sunday, less than a week after two satellites collided in space and a day after the Federal Aviation Administration asked U.S. pilots to watch for "falling space debris," authorities said. 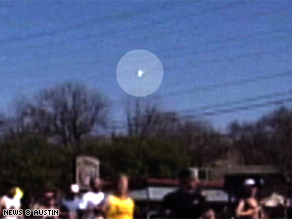 There were no reports of ground strikes or interference with aircraft in flight, FAA spokesman Roland Herwig said.

Herwig told CNN the FAA received no reports from pilots in the air of any sightings but the agency recieved "numerous" calls from people on the ground from Dallas, Texas, south to Austin, Texas.

Video shot by a photographer from News 8 TV in Austin showed what appeared to be a meteor-like white fireball blazing across a clear blue sky Sunday morning. The photographer caught the incident while covering a marathon in Austin.

On Saturday, the FAA told pilots through its routine notification system that "a potential hazard may occur due to re-entry of satellite debris into the earth's atmosphere." The notice did not specify a time or location.

Herwig said most of the reports the FAA received came in about midday Sunday in an area of Texas from Dallas south to Austin. iReport.com: Did you see the fireball? Send photos, video

He said he was not certain where the information that sparked the FAA notification came from, but it was "probably from NORAD," or the North American Aerospace Defense Command, which tracks man-made objects in space. Calls to NORAD headquarters in Colorado were not immediately returned.

Lisa Block, spokeswoman for the Texas Department of Public Safety, said her agency had received calls from residents surprised by sonic booms about 11 a.m. She said calls came from an area from Dallas to Houston.

Last week, the Russian and U.S. space agencies said two satellites, one Russian and one American, collided about 496 miles (800 kilometers) above Siberia, Russia.