'Everybody loved being around her'

(CNN) -- The women hockey players gathered at the center of the rink and prayed. Tears wet their cheeks and most held hands. Then they lit 10 candles, the number on the jersey of the missing teammate, the one with the huge smile and even bigger heart, who died in last week's plane crash. 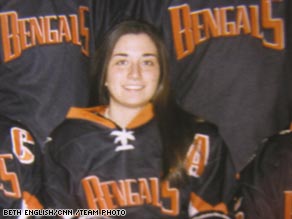 Madeline Loftus, 24, was killed aboard Flight 3407. She was returning to Buffalo for a reunion hockey game.

Madeline Loftus, known as Maddy, was one of 49 people to die aboard Continental Connection Flight 3407 last Thursday. She was returning to Buffalo State College to play in a reunion hockey game on Saturday, to meet up with her old classmates to play the game she loved so dearly.

"She popped into my head every time I got back to the bench," said former teammate Emma Wadsworth.

Breaking down in tears, she said the game was filled with sadness because "Maddy wasn't here." She described Loftus as an "awesome teammate, a beautiful person always smiling, and always upbeat, and ready to cheer you up if you were having a bad day."

"She was just amazing," Wadsworth said.

Her teammates said they decided to play the game out, because Loftus would've wanted them to play on. Loftus' No. 10 jersey hung from the bench near her friends and former players.

"It's a really hard time for her teammates, for her friends, for her family," said teammate Janelle Junior.

Loftus, 24, of Parsippany, New Jersey, played two seasons at Buffalo State from 2002 to 2004 before transferring to St. Mary's University in Minnesota after her sophomore year.

At St. Mary's, she was a marketing major who starred on the hockey team from 2004 to 2006. While there, Loftus helped form the Cardinal Athletic Council, a student-athlete outreach program to help with community service projects.

"Madeline was an important part of the university and athletic communities. Our thoughts and prayers now turn to Madeline's family, friends and teammates as they cope with this sudden loss," St. Mary's athletic director Nikki Fennern said in a statement.

"Maddy was the first senior to graduate from my program. She will always hold a special place in my heart," said Terry Mannor, St. Mary's women's hockey coach. "Everyone who knew her will remember someone full of life and compassion. She was loved by everyone and will be greatly missed."

Officials in Buffalo have said that it may take several days before all the bodies are recovered from the crash site, as investigators work through freezing temperatures and piles of wreckage.

See photos of the crash site »

About 1,000 people gathered at a church in western New York Monday to remember the crash victims. The community memorialized the 50 victims, with religious leaders from Christian, Jewish, Muslim and Hindu communities offering words of sympathy to the community.

Each speaker emphasized that everyone in the community is connected by the tragedy. One leader said we "gather in our common desire to console one another."

All 49 passengers and crew members aboard the 74-seat turboprop were killed when the plane crashed into a home in Clarence Center, New York, on Thursday night. A 61-year-old man in the house was also killed.

While investigators try to piece together the cause of the crash, portraits of those who died aboard the flight have emerged:

• Alison Des Forges spent four years in Rwanda documenting the 1994 genocide and had testified about that atrocity and the current situation in central Africa before U.N. and congressional panels.

• Beverly Eckert was the widow of Sean Rooney, who died in the World Trade Center in the terrorist attacks of September 11, 2001. After Sean's death, Eckert co-founded Voices of September 11, an advocacy group for survivors of the attacks and families of those killed.

• Gerry Niewood was traveling with jazz guitarist Coleman Mellett for a show with musician Chuck Mangione and the Buffalo Philharmonic at Kleinhans Music Hall.

• Co-pilot Rebecca Shaw's father said she loved to fly and "couldn't believe she'd get paid" when she took the job. Learn more about the victims

On the ice rink in Buffalo Saturday, Loftus' friends played with a heavy heart. This would have been her first time on the ice with her former Buffalo State teammates since her playing days.

Jessica Aykroyd said she had spoken with Loftus right before she left for the airport. "The last thing I have is: Can't wait to see you," Aykroyd said.

Lindsay Welch said simply, "Her friends and hockey is what she was all about."

So passionate about hockey, Loftus was the first female to play on the boys' team in high school. In college, when she wasn't playing, she worked as a student assistant for the ice rink. "She was a great student, she was a great hockey player and just a great person. Everybody loved being around her," said rink manager Jim Fowler.

Those who knew her in Minnesota agreed. "Her classmates were always eager to work with her on projects," said Thomas Marpe, dean of St. Mary's School of Business. "Maddy was enthusiastic about life and especially about women's hockey."