WASHINGTON (CNN) -- Faulty electrical wiring is already suspected in the deaths of several U.S. troops in Iraq. Now contractors who worked in Afghanistan are reporting similar problems at American bases there. 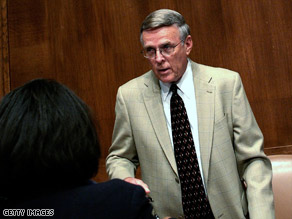 In July, Sen. Byron Dorgan held a hearing on troop electrocutions. He wants a faster response to the problem.

"In general, the electrical power systems in the camp can be described as a disaster waiting to happen," electrician Noris Rogers wrote to his bosses at military contractor KBR about conditions at one base in 2005. The letter warned of "extreme dangers" of electrical shock and fire hazards at the facility.

Rogers, who left Afghanistan shortly after writing that letter, told CNN that the work done by KBR at one U.S. base in Kabul was "by far" the worst he has seen in 20-plus years in the trade.

"As a complete whole, the electrical work at the camp was very dangerous," he said. "And I don't think it would be an exaggeration to say that I don't believe any of it was done safely."

Jeff Bliss says he saw similar electrical hazards when he worked as an electrician in Afghanistan. Bliss, also a former KBR electrician, told a Senate Democratic Policy Committee meeting in 2008 that "the carelessness and disregard for quality work at KBR was pervasive."

In one case, Bliss said, a soldier at a field command post received a 400-volt shock from wiring that other soldiers told him had been installed by a plumber and a security guard. The 20-year veteran of the trade said KBR hired many unqualified or unlicensed electricians, and relied heavily on non-American workers who were unfamiliar with U.S. standards and spoke little or no English.

Bliss, Rogers and three other experienced electricians who worked for KBR in 2005 and 2006 told CNN that their warnings to supervisors were ignored. The electricians showed CNN photographs they say show dangerous wiring, and overloaded or badly wired circuit panels that have caused fires at U.S. installations.

And several U.S. soldiers who were stationed in Afghanistan said they received electrical shocks themselves or knew soldiers who suffered them. The soldiers said they preferred to not be identified because of possible retribution from the Army.

KBR would not comment on specific criticism about the company's work in Afghanistan, but it has consistently denied any improper electrical work or responsibility for deaths or injuries.

"The electrical standards in Iraq are nowhere near those of Western standards," it told CNN in a written statement. "So we are adapting to an environment that existed long before KBR got on the ground in Iraq and Afghanistan."

In Iraq, at least 18 U.S. troops are known to have died by electrocution -- many while on U.S. bases being managed by various military contractors, including KBR. The Pentagon would not say whether there were any fatalities or serious injuries from electrocutions in Afghanistan, telling CNN it would not comment on an ongoing investigation by the Defense Department's inspector general.

But the Pentagon said it considers electrical dangers to be "a very serious issue," and has launched widespread inspections in Afghanistan and Iraq to fix any electrical hazards and ensure that future installations comply with U.S. electrical code.

Sen. Byron Dorgan of North Dakota, who leads the Democratic Policy Committee, said the accounts from Afghanistan show "some of the same problems exist in both war theaters."

"I don't think the problem has been fixed," Dorgan said. "I don't think at this point the Pentagon has bitten the bullet to say, 'We're going to fix these problems in a very significant way, and we're going to cause contractors to be accountable for their work.' I think, as a result of it not being fixed, I think there are risks."

Dorgan said he was "outraged" at the Defense Department for not moving faster to fix electrical hazards.

"Our soldiers shouldn't be taking risks by taking showers," he said. "They ought to be able to expect that the electrical work at their military base is not going to result in their death or injury because of shoddy workmanship."

KBR has already come under fire for its work in Iraq. The Army's lead investigator into the death of Staff Sgt. Ryan Maseth, of Pittsburgh, Pennsylvania, recently wrote that she would recommend Maseth's cause of death be changed to "negligent homicide." Her report accused KBR of failing to properly supervise or inspect its work, but the Army has yet to make a final ruling on the case.

Maseth was found dead in the shower in his Baghdad quarters in January 2008. Two of the soldiers who told CNN that they suffered shocks in Afghanistan said they were in showers at the time as well.

Army inspectors recently found KBR failed to do proper electrical wiring on bases in Iraq. Their report found that incidents of electric shock were happening an average of every three days for nearly two years, and that the company was in serious violation of its contract.

All About KBR Inc. • Afghanistan • Iraq