(CNN) -- If you're unemployed, you know it's a rough time to be on the job hunt. 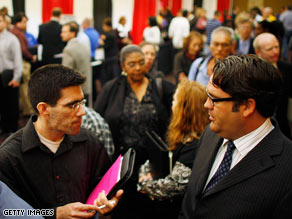 The best industries to look for jobs: government, education and health care.

There's a huge pool of unemployed workers out there, and the unemployment rate continues to climb.

But if you want work, you need to block out the doom-and-gloom news about the economy, particularly this Friday's federal jobs report, said John A. Challenger, chief executive office of Challenger, Gray & Christmas, a prestigious job-placement and consulting organization.

"Don't listen to it," he said. "It's not relevant to any one person's search."

"You have to get a fast start, and you have to stay at it in this kind of market, because there are more people searching for fewer jobs," he said. "So you cannot let up."

But before you drop the laptop to go photocopy résumés, it may help to target your job search to certain industries or locations.

It's generally agreed that there are more jobs available in health care, education, government and agriculture than in other industries. Those jobs are also thought to be more stable than those in failing industries like banking, manufacturing and construction. iReport.com: Tell us how your job hunt is going

Applicants should market their skills to the stable industries, no matter what profession they're coming from, said Jennifer Grasz, a spokeswoman for CareerBuilder.com, the nation's largest job listing Web site.

To get the jobs, applicants should be flexible, Challenger said.

"Be open to changing industries. Be open to moving for a job if you find one. Be open to a part-time job as an audition," he said.

These days, about 40 to 50 percent of successful job applicants have changed industries to get work, he said.

There are also jobs within failing industries, he said, but they probably are not the same jobs that were hot before.

For example, a glance at an auto dealership might show that business is dead. But car mechanics probably are busy behind the scenes.

"People are holding on to their cars longer, needing more repairs," he said. "So jobs for automotive mechanics are in strong demand."

CareerBuilder.com released a map Thursday showing where jobs are most available, per capita.

The highest rate of jobs listed by the site is in the South, where Grasz said health care and energy are leading the way. As retirees move to warmer climates, the health care industry will continue to grow, she said.

Among the worst places to look for jobs is the upper Midwest, the site says, where thousands of manufacturing jobs have been lost and unemployment is high; the finance industry in New York is also crippled.

California's Web industry has seen major losses in recent months but probably will bounce back in the long term, Grasz said.

But the site's analysis is limited, Challenger said. Looking at low unemployment rates, he said the best places to hunt for a job are in the middle of the country, particularly in North Dakota, Minnesota, Kansas and Oklahoma.

Many Southern states, particularly South Carolina and Florida, have been ravaged by layoffs and home foreclosures, he said.

Both Challenger and Grasz said the industry makes more of a difference than the job's location.

Monster.com, another jobs site, said most industries added more jobs to online search lists in February than did so in January. But the rate of new job openings still is 26 percent below that of this time last year, the site said in a report.

Jobs in real estate, those with utilities and those in administration posted the biggest gains in February, according to the Monster Employment Index report, which measures job listings at several major job-search sites, including Monster.

Ryan Sweet, a senior economist at Moody's Economy.com, said no industry has been safe from cuts, and only education and health care can be seen as bright spots in the grim economic picture.

"Conditions will likely get worse before they get better," he said, noting that unemployment is expected to rise into 2010.

In such a competitive environment, Challenger said, it's important for each job seeker to make his or her search unique.

"Always focus on your core skills. You are really defined by your function, not your industry," he said.

It also may help to use a bit of common sense, he said.

Look to industries that you think everyone would need, even when their budgets have shrunk.

"There are some places that are OK in this economy: health care, education, government ... core consumer products," he said. "We're going to all continue to go buy our Grape-Nuts and our coffee."

All About Unemployment Rate • National Economy