NEW YORK (CNN) -- Three people were arrested Saturday after chaos broke out at an "America's Next Top Model" audition at a New York hotel, police said. 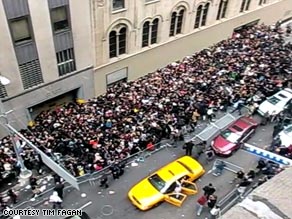 A large crowd at the Park Central New York hotel got unruly Saturday during a "Top Model" audition.

Six people were injured, and two of them sought treatment at a hospital, authorities said.

Police said they didn't know what provoked the bedlam.

Three people were charged with disorderly conduct and inciting a riot in connection with the incident at the Park Central New York hotel in Manhattan.

The audition was shut down after the incident, authorities said.

Calls to Park Central management were not immediately returned on Saturday.

The "Top Model" competition, hosted and produced by supermodel Tyra Banks and aired by the CW network, is in its 12th cycle.