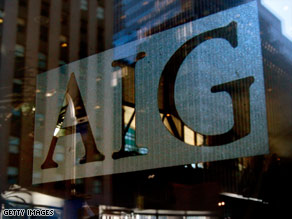 AIG says it "recognizes the importance of upholding a high degree of transparency" relating to bailout money.

AIG, a recipient of at least $170 billion in federal bailout money , got an $85 billion loan from the Federal Reserve.

The list released Sunday of "counterparties" that benefited from the bailout is topped by European banks Societe Generale and Deutsche Bank, which received $4.1 billion and $2.6 billion, respectively.

In releasing the list, AIG said it "recognizes the importance of upholding a high degree of transparency with respect to the use of public funds," in a statement.

Lawmakers have been pushing for AIG to release a list of its counterparties since last fall, arguing taxpayers have a right to know how federal aid is being used.

Earlier this month, in reference to lawmakers' request for a list of AIG's counterparties, U.S. Rep. Carolyn Maloney, D-New York, told CNNMoney it was critical to determine whether AIG's collapse would have resulted in a market catastrophe.

"We were told AIG posed systemic risk to our economy," she said. "How do we know if that's true if we don't know where the money went?"

Below are the top 10 largest payouts, according to a report released Sunday by AIG.

Officials from the Federal Reserve and AIG have resisted disclosing the identity of the banks, citing concerns about competition and confidence in the market.

Kohn's comments drew scrutiny from the committee, namely chairman Sen. Chris Dodd, D-Connecticut, who replied, "Right now the public is deeply, deeply troubled by all of this. And it's their money that is being fed into these operations, and they, frankly, don't understand -- nor do we -- the legal arguments you're giving, but at a time we need to engender public trust and confidence in these very difficult steps, that kind of an answer undermines that effort very significantly."

AIG, in its statement Sunday, said it consulted with the Fed about the benefit to the public of disclosing the counterparties, and whether doing so would cause "competitive harm."

The company also faced criticism over the weekend from White House officials and some congressional lawmakers who reacted strongly to news that AIG had intended to pay out $165 million in bonuses and compensation.

Under pressure from the Treasury, AIG scaled back those plans and pledged to reduce 2009 bonuses -- or "retention payments" -- by at least 30 percent. That did little to temper outrage at the initial plan, however.

"I write to ask why any bonuses would be legally required, given the company's abysmal performance," said Feingold, D-Wisconsin. iReport.com: AIG, 'You failed'

"Of all the events and all of the things we've done in the last 18 months, the single one that makes me the angriest, that gives me the most angst, is the intervention with AIG," Bernanke said."

AIG lost a record $62 billion dollars in the fourth quarter of 2008. It has more than 74 million insurance policies issued in 130 countries around the world.