Ex-thief a convert to money missionary

MIAMI, Florida (CNN) -- You don't expect to hear an electric saw in church, but Kevin Cross uses the tool along with a frying pan, blender and toaster oven to help free people from debt. 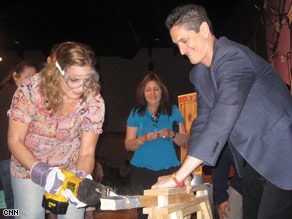 Kevin Cross holds the boards steady as a woman uses a reciprocating saw to cut up her credit cards.

This money missionary helps people destroy those little plastic shovels, otherwise known as credit cards, that so many people have used to dig their way to financial ruin.

"It's such an easy message. It really is," says Cross, an ex-con who credits religion for his conversion from thief to money coach. "That's why it doesn't take a rocket scientist, it doesn't take a CPA to do it. A first-year bookkeeper can figure out that you can't spend more than you make," he said.

Earlier this month, Cross spoke to about 150 people at the Miami Vineyard Community Church where Kevin Fischer is the pastor.

Fischer says the pressure of money and debt is enormous on people, especially more recently.

"We should change the marriage vows from 'till death do us part' to 'debt do us part' because that's what's going on, and it's so true," he said.

Cross is breathless. As he speaks to the crowd, he's a non-stop, doesn't-come-up-for-air, high-octane money missionary.

He uses Christian principles, prayer, common sense, and a few good one-liners to get his message across.

Cross presides over a day-long sermon on how people can make their lives better by taking control of their spending. He says he tries to demonstrate the long-term effects of irresponsible borrowing. Simple stuff, he says, will make people more content and give them the cushion necessary to give back.

His new book is "Building Your Financial Fortress in 52 Days."

"I want to get people to have more margin, so instead of investing in stuff, and stuff that doesn't last, they can invest in people's lives," he said.

The tools he uses to hammer home his message go beyond his overhead TV screens, charts and calculators. Cross invites his guests, who pay $25 a head to hear his message, to come up to the front of the room for what he calls the beginning of "freedom."

30 percent
Americans polled who are worried about paying bills, including credit cards

On a table, sit a frying pan, a toaster oven, a blender and a wooden sawhorse and an electric saw. About six people cut up their credit cards and bake them in the toaster oven as if they were TV dinners.

Others sliced and diced their Visa, MasterCard and Amex, before mixing the pieces with Spam in the blender.

At one point, Cross called for some cooking oil as one lady stood over her credit card-saute with a spatula.

Holding a plate full of the little pieces of credit card, Cross said, "This looks like a melted credit card, but this really represents freedom in these people's lives, because it's the first step."

Cellie Mayol says she used to have 10 or 11 credit cards. She put on protective goggles, taped her cards to a two-by-four and shredded them with a reciprocating saw.

"It just felt like the right thing to do to get me started on the right path," she said. "The Sawzall [reciprocating saw] was exhilarating. I love that feeling."

Cross was a bookkeeper and skimmed money from an account filled by payments from court judgments. He invested the stolen funds and profited about $50,000 before he was caught. He was charged with fraud and theft, and spent minimal time in jail.

He paid half the money back. But, he says, that was another life ago.

"I could spend a thousand dollars a day," Cross told the crowd.

"Although, I'd have to spend about two days recovering from that -- you know what I mean," he said. "I completely sabotaged my life, all in one year. I did more damage in one year than most people do in their whole life."

One night, as a 20 year old, he says, he was parking cars at Miami's Hyatt Regency hotel. He was wearing black ladies garden shoes, because he couldn't afford the black sneakers that were part of his uniform.

A Jaguar pulled up, and inside was one of Miami's most recognizable newsmen, anchorman Dwight Lauderdale. He took the car, turned on the radio, and heard a Christian financial expert say, "There is hope for the hopeless. All you have to do is give your heart and soul to the Lord."

"I wasn't going to find satisfaction in money. The only place I was going to find it was outside of that, and I found it, in turning my heart over to God."

He became a CPA and spends one full day each week doing free financial counseling for needy people.

He says he no longer gets high on money. He only helps people understand that they can manage their money in a way that can help themselves, their families and others.

Juan and Beth Diaz were at the seminar. They said they ran up their credit cards and that their home, south of Miami, went into foreclosure last year.

"America has been a very greedy, give-me-now country for so long, and I think it's a wake-up call for everybody that we can live differently," said Beth Diaz.

Juan Diaz, her husband, says doing away with credit cards has helped them. The couple plans to be debt free in about 18 months.

"They're telling you: 'Use me, you need me' -- and they own you. We've gotten to the point where we just don't need credit cards," he explained.

"Everything we do, we plan, and if we don't have the money, we just don't buy it," he said.