WASHINGTON (CNN) -- With outrage mounting over AIG's $165 million in bonuses to executives, the president's chief economic adviser offered a new line of defense for the White House in an exclusive interview with CNN. 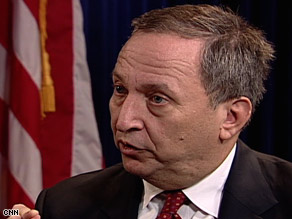 Larry Summers said an AIG meltdown was too risky for the economy to push too hard on executive bonuses.

Larry Summers suggested that if Treasury Secretary Timothy Geithner had pushed the insurance giant too hard on the bonuses, AIG could have collapsed just like Lehman Brothers and sparked an even bigger crisis.

"Secretary Geithner has used all the legal authorities that are open to him to contain and limit the payment of bonuses," said Summers, chairman of the National Economic Council. "What he did not do, and what would have been irresponsible to do, as outrageous as these payments are, would have been to put at risk the stability of the financial system.

"To have courted the kind of disaster that followed the decision to let Lehman Brothers simply collapse might have felt good briefly, but it would have touched the lives of a huge number of Americans who would have unnecessarily become unemployed or seen destruction of their lifetime savings."

The collapse of the 158-year-old investment bank in September turned the U.S. crisis, based on the subprime loan debacle, into a global one, leading to credit freezes and plummeting markets nearly everywhere.

Summers said Geithner was notified about the AIG bonuses last week. The secretary tried to stop them, Summers said, but ran up against a legal contract.

Asked whether AIG could get more bailout funds down the road, Summers suggested the door is open to more taxpayer money, despite the bonus controversy.

"It is wrong to govern out of anger," said Summers. "We have to recognize what we are angry about, do something about it. That's why we are focused on a new resolution regime as part of a sweeping overhaul of the financial system.

" ... But we can't let anger stop us from taking the steps that are necessary to maintain the stability of the financial system, keep credit flowing."

"There's one lesson of the history of financial crisis that no one can argue with, and that is that they all end, and this one will, too," he said. "And if we are able to maintain the right policies, we'll bring forward the day when it ends, and -- probably even more important -- we'll have a sounder stronger economic expansion at the end of it."

The former treasury secretary is not quite as bullish about a turnaround, however, as Federal Reserve Chairman Ben Bernanke, who predicted the recession may be over by the end of 2009.

Asked about Bernanke's prediction, Summers said he was upbeat about some aspects of the economy -- such as a 22 percent spike in housing starts and recent upticks in the stock market -- but said he was cautious about making any grand pronouncements.

Summers told CNN that while he's confident of a turnaround, "just what day the turn will come isn't something that I would dare to forecast."

Asked specifically about Bernanke's prediction on CBS' "60 Minutes" about the recession ending this year and 2010 potentially being a year of recovery, Summers demurred.

"We always are at pains to recognize when we talk to the president that economic forecasting is the most imperfect of sciences," said Summers. "Many people would say it wasn't a science at all. We stress the uncertainties in this situation."