Lawsuit on alleged Abu Ghraib prisoner abuse can move ahead 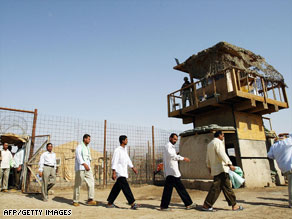 Reports of torture and humiliation by soldiers and civilian contractors against Iraqi detainees created a political, diplomatic and public relations nightmare for the Bush administration in the months and years after the 2003 Iraq invasion.

Four Iraqi detainees have sued in U.S. federal courts, alleging contract interrogators assigned to the Baghdad Central Prison -- known as Abu Ghraib -- subjected them to beatings and mental abuse, then destroyed documents and video evidence and later misled officials about what was happening inside the facility.

Eleven U.S. soldiers who also worked at the prison were court-martialed under the Uniform Code of Military Justice for prisoner abuse, and several implicated company workers in similar crimes. No contractors have yet faced criminal charges in the wake of the scandal, however.

Arlington, Virginia-based CACI said it was merely providing contracting services the government required, and that sensitive political and policy questions could not be brought up in any civilian trial.

"While it is true that the events at Abu Ghraib pose an embarrassment to this country, it is the misconduct alleged and not the litigation surrounding that misconduct that creates the embarrassment," Lee wrote.

"This court finds that the only potential for embarrassment would be if the court declined to hear these claims on political questions grounds. Consequently, the court holds that plaintiffs' claims pose no political question and are therefore justiciable."

The four Abu Ghraib detainees, led by Suhail Najim Abdullah Al Shimari, were released between 2004 and 2008, and were never charged with a crime, said their attorneys. They were represented in their civil suit by the Center for Constitutional Rights and other individual lawyers. Other Iraqi civilian lawsuits are pending.

"They must act within the bounds of law and must be held accountable for their participation in the atrocities at Abu Ghraib and the other facilities in Iraq. We believe their actions and the acts of torture of their employees clearly violated the Geneva Conventions, the Army Field Manual and the laws of the United States."

The case is Al Shimari v. CACI Premier Technology Inc., 1:08cv827. There is no word on when the case might go to trial; it could also be settled out of court.