(CNN) -- Former mortgage broker Alberto Gonzalez is doing well in this economy -- so well that just six months after opening his first restaurant in Chicago, Illinois, he is doing the unthinkable: expanding. 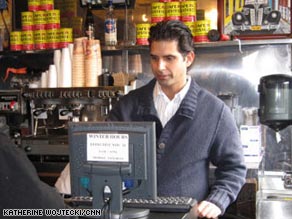 Alberto Gonzales is expanding after opening a cafe just six months ago.

His second restaurant is scheduled to open in May.

"I'm nervous, very nervous. But then again it's all about risk," said Gonzales, owner of 90 Miles Cuban Café.

"It kind of fell in my lap. The location became available. A friend of mine brought it up and due to the success we had we thought it would be a good time to take advantage of everything that is going on," said Gonzales.

But with a slew of small businesses closing each day, Alberto said luck isn't a factor in his success. "I feel fortunate that I had a vision. I didn't hold back from doing it, I risked it all. It's kind of like going to Vegas and putting everything on red and I kind of did that based on my research and so far it's shown that my research has paid off."

Some of his friends think he's crazy for risking it all in a downturn economy. "Very crazy. It's okay though, I felt the pressure. It just gives me that much more eagerness to succeed," said Gonzales.

He was was 11 when he left Cuba with his family. He helped his dad sell fish in Key West, Florida, to make a living. Almost 30 years later, after struggling in the mortgage business, Gonzales opened his own restaurant, using old family recipes.

But in this economy, 90 Miles Cuban Café's success isn't just helping Gonzales. It's helping his suppliers too. By opening up a second location, he creates a positive ripple effect by spending more with his suppliers, such as Daily Meats.

"It gives more volume for us on the pork products he buys and the beef products he buys. Volume goes up which is good. It's always good," said Mario Jaile, Jr. of Daily Meat Supply.

And the ripple effect doesn't stop there. The Turano Baking Company supplies bread to 90 Miles.

"Obviously our sales rep on the street was extremely excited because that is another new account but it was outstanding to hear. Nowadays especially, businesses have really cut back on the openings; they are holding a little tighter to the vest and here is someone who has only been in the business six months and they are opening a second location. How awesome is that?" said Turano's Bill Carlson.

Ernesto Reyes of Ez Tech Design, who does advertising for Gonzales, is also benefiting from Alberto's success.

But it's even more good news for Alberto and his second Chicago location.

"I like to believe that we are an inspiration to all of those that it's possible to happen in a downturn economy."

All About Cuba • Jobs and Labor • National Economy