NEW YORK (CNN) -- Victims fleeced by Bernard Madoff's investment scheme may be forgiven for being wary of a something-for-nothing offer. But through Saturday, a New York City restaurant is offering them the real thing: a free three-course meal. 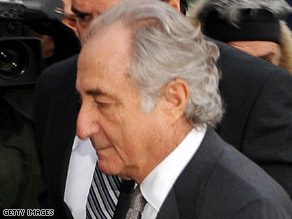 Poached halibut, braised pork osso buco and even grilled filet mignon -- nothing on the menu is off limits. All a person has to do is show proof of victimization, and Nino's 208 will provide a free, elegant meal at the upscale Italian restaurant.

Nino Selimaj, owner of the restaurant located a mere four blocks from where Madoff ran his fraudulent investment firm, said he decided to offer this special because he knows what it's like to lose all your money.

"Whatever is on the menu is available to victims of Madoff's scandal ... because I have sympathy for these people," he said. "I was in a similar situation in 2000. I lost all my money in [the] stock market. Losing your life savings is not easy. ...

"No matter how much money you have, if you have $100 million and you lose $100 million, you are completely broke."

His offer is especially surprising because his business has been affected by the economy as well. "In seven of my restaurants my business is off 15 to 35 percent," he said.

Rick Miller and his wife, Ellen, were among those drawn to Nino's 208 by the offer. He said they lost "personally about $10 million and our family about $40 [million]."

Selimaj was said he was delighted the Millers took advantage of the special: "I don't have cash to give them but at least a meal will put a little smile to their faces."

Nino's 208 head chef Merlin Tlapa, agreed. "That's what it's about, just making people happy and helping them to forget about what's going on."

Miller said he read about the special on The New York Times' Web site and decided he could use a great Italian meal, especially since it was free.

The Millers said they used to have lavish dinners about once a week, but they don't know if they will be able to do that again anytime soon.

"We used to travel a few times a year, take vacations, and now that just doesn't seem like a possibility," Ellen Miller said. "... Couple that with the way the economy is going, each of our businesses are also on the downside. The income coming in last year wasn't where it was even without Madoff."

Her father, she said, was the one "who first introduced us to the whole Madoff program. My father, my brothers, my uncles, my aunts -- everyone has been devastated by this."

"After Madoff, we are essentially where we started 30 years ago," said her husband. The Millers had expected to virtually retire in two to three years, but now they say they will be working for at least the next 20 to 30 years.

"We are good for the four to six months and I don't really know what's going to happen after that," Rick Miller said.

He said they received monthly statements from Madoff, and they thoroughly rechecked the monthly numbers and the annual total. "We were led to believe that this was legitimate and in truth it was a hoax," he said.

The Miller's son, Josh, said he had lost $2.5 million in the scheme. "If I really got stuck in a jam, I would [have been] able to get myself out. Now that's gone and the reality of working just as hard or harder is just as real and just that much more serious."

Josh Miller said he is concerned for his parents' well-being, but he plans to take this time to look forward to the future. "It's an opportunity to rebuild and move forward and do it better and do it smarter. And I plan to do that."

His father agreed, saying, "We are hardworking and diligent survivors and this will become an experience that life teaches you, that we will benefit from and grow stronger from it."

Nino's 208 manager Benny Gocaj promises that Madoff victims like the Millers will find a brief escape from their worries when they come in.

"Every single customer, when they come for the first time, they leave happy," he said.