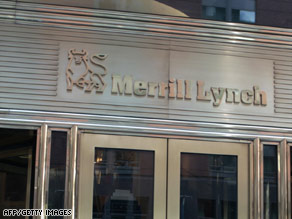 The judge's decision concluded weeks of back-and-forth between New York Attorney General Andrew Cuomo and Bank of America regarding the release of the information. Cuomo is leading an investigation into whether Bank of America and Merrill failed to properly disclose to shareholders details about the bonuses.

"Today's decision in the Bank of America case is a victory for taxpayers," Cuomo said in a statement. He added, "Fried's decision will now lift the shroud of secrecy surrounding the $3.6 billion in premature bonuses Merrill Lynch rushed out in early December. "

Bank of America spokesman Scott Silvestri said the bank would abide by the judge's ruling.

"We will, of course, comply with the order of the court and turn over the information requested. We will continue to cooperate in the attorney general's investigation," Silvestri said.

A petition to keep information including bonus details confidential was initially filed by Bank of America in New York state court on March 4. At the time, Bank of America spokesman Robert Stickler said, "We do this out of concern for the privacy of our employees and because we think disclosure would create a competitive disadvantage."

Cuomo then asked the court on March 6 to reject Bank of America's petition.

He said in a letter that the bank has not complied fully with a subpoena his office issued, and has been trying to "stymie" the investigation by seeking to prevent witness testimony.

Cuomo also subpoenaed seven former Merrill Lynch executives on March 6 over their bonus payments, a source close to the investigation told CNN. Among the subpoenaed executives are Andrea Orcel, Thomas Montag and Peter Kraus, according to the source.

The source did not know the names of the other four former executives who received subpoenas.

On March 11, Cuomo filed an additional request to have the the temporary confidentiality order reversed. In the filing he alleged that Merrill Lynch may have misled Congress last November by saying it planned to pay its employees their bonuses at the end of the year when instead the payments were made earlier than indicated.

Cuomo said that because the payments were made earlier, federally bailed-out Bank of America "clearly could have influenced, if not controlled, the timing of Merrill's bonuses."

The filing also said: "Without knowing the names of the individual bonus recipients and what they were awarded, it is exceedingly difficult to ascertain which individual bonuses might have run afoul of the law."

Kenneth Lewis, Bank of America's chief executive officer, spent four hours on February 26 testifying at the attorney general's office about the bonuses that Merrill Lynch paid out just before it was acquired by the bank last year, but declined to give out details of those payments.

The New York Attorney General's Office served an earlier subpoena on Bank of America during Lewis' testimony that day, seeking the full list of individual bonus recipients at Merrill Lynch, according to Benjamin M. Lawsky, a special assistant to Cuomo.

"We obviously wanted to question Mr. Lewis about this list and are very disappointed that Bank of America has chosen not to produce it," Lawsky said in a written statement. "As a result, during the testimony ... we served a subpoena on Bank of America for the list, which we intend to obtain."

Lewis, speaking to reporters as he left the attorney general's office after his testimony on February 26, said that he had come to "deliver clarity" and that he answered the questions that were asked to the best of his knowledge.

Lewis had been criticized for using a corporate jet to travel to the session. But Bank of America spokesman Timothy Gillis said Lewis did so "because of the high importance" of the meeting.

Bank of America has been allocated $45 billion in federal bailout funds and the Treasury has guaranteed to protect Bank of America against potentially billions of dollars in losses from investments Merrill Lynch made in real estate loans.

Former Merrill Lynch chief executive John Thain told investigators that Lewis was aware Merrill employees would be awarded billions of dollars in bonuses before Bank of America's takeover of Merrill became effective January 1, according to sources familiar with the investigation.

In testimony before the House Financial Services Committee on February 11, Lewis said he had little involvement in the Merrill bonus plan.

"They were a public company until the first of the year, they had a separate board, separate compensation committee and we had no authority to tell them what to do, just urged them what to do," Lewis said.

But Cuomo's staff obtained a document, negotiated between Bank of America and Merrill during their takeover negotiations, that set a cap for Merrill Lynch's bonus pool at approximately $5 billion, said sources with knowledge of the investigation.

Bank of America confirmed there was a cap set. Cuomo has accused Merrill Lynch of trying to hide lavish bonus payments.

Cuomo found Merrill paid its four top bonus recipients $121 million and doled out bonuses of $1 million or more to 696 employees, as the firm lost $15 billion in the fourth quarter. It is not clear how much each of the subpoenaed Merrill executives received in bonus payments.

Cuomo is investigating to see whether failure to disclose the bonus payments to investors violated New York's Martin Act, a powerful securities law that empowers the attorney general to bring not only civil but also criminal charges.