(CNN) -- Some 5,000 residents in eastern Pennsylvania were allowed to return to their homes Saturday afternoon, some 12 hours after they were evacuated when a tractor-trailer carrying 33,000 pounds of toxic hydrofluoric acid overturned after the driver tried to avoid a deer, authorities said. 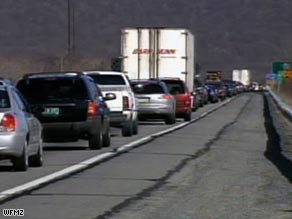 Traffic is backed up Saturday after a truck spilled hydrofluoric acid in eastern Pennsylvania.

State police identified the driver as Raymond Leblanc, 54, of Harrow, Ontario, Canada. Leblanc, who initially was trapped in the truck, was taken to a hospital where he was treated and released. Police said a passenger in the truck was unhurt.

The truck flipped over on its side and slid along northbound State Road 33, which was closed in both directions from Belfast to Saylorsburg, Pennsylvania, from the time of the early-morning accident until about 6 p.m. Saturday.

Most of the acid in the tank was in the form of pressurized gas, but there also was some water, said Northampton County spokesman John Conklin.

State and federal hazardous materials experts stopped the leak by noon. The wreck occurred at 3:30 a.m. near Wind Gap.

Conklin said many evacuees -- those living within a mile of the accident site in Plainfield Township -- went to a shelter set up at nearby Pen Argyl High School in Pen Argyl, Pennsylvania.

A dispatcher with the Northhampton County Division of Emergency Management said residents were allowed to begin returning to their homes about 3:45 p.m. Saturday.

Hydrogen fluoride is a hazardous chemical compound used mainly for industrial purposes such as etching glass, and is extremely corrosive. It also is an ingredient in high-octane gasoline, refrigerants, aluminum and light bulbs.

All About Pennsylvania • Accidents and Disasters