EL PASO, Texas (CNN) -- The cell phone rang as Jorge Aguirre walked to a friend's funeral in Juarez, Mexico, last November -- a funeral for a fellow journalist who, Aguirre says, was assassinated for the critical stories he wrote. 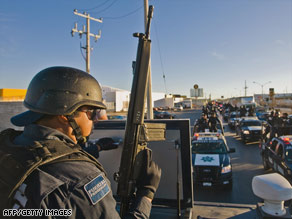 When he answered the phone, Aguirre heard a profanity-laced threat. "They told me I was next," Aguirre told CNN. "I thought they were going to kill me right there."

Aguirre immediately gathered up his family and darted across the border into El Paso, Texas. He hasn't returned to Juarez since that day.

Aguirre is seeking asylum in the United States, and he's part of a growing trend among Mexican citizens looking to escape the violence and corruption of their homeland.

According to the U.S. Citizenship and Immigration Services, an agency that falls under the Department of Homeland Security, the number of Mexican nationals requesting asylum in the United States based on "credible fear" has gone up every year since 2003, even as the overall number of "credible fear" asylum cases remains steady.

In 2003, the USCIS reported 54 asylum cases from Mexican citizens. In 2008, that number reached 312. But asylum requests based on fear of violence aren't easy cases to make. Last year, the United States approved less than half of those cases.

"Whether they're fleeing extortionists or potential kidnappers or they're leaving because of the drug cartels, it tells you there are definitely problems in Mexico right now," said El Paso Mayor John Cook.

Those seeking asylum come from every walk of life. There are journalists, entrepreneurs and even law enforcement officials, including three police chiefs.

For Raymond Cobos, the sheriff in Luna County, New Mexico, this is the most disturbing revelation.

Just across the Mexican border is a dusty, far-flung outpost called Palomas, a speck of a town that's a popular path for drug trafficking and human smuggling. It's also been the site of wild gunbattles between cops and the cartels.

"I don't know what I would do. It's pretty hard to fight that type of situation by yourself -- if you're in an environment that you don't know from one day to the next if someone's going to knock on your door and blast your family away," Cobos said.

Emilio Gutierrez is another journalist hiding in El Paso. He wrote stories critical of the Mexican government for a small newspaper in the northern Mexico state of Chihuahua, which shares a border with Texas and New Mexico.

Last May, Gutierrez says men dressed in Mexican military fatigues raided his home in the middle of the night. He was told they were looking for drugs and weapons. A month later, a friend called, frantically urging him to hide.

Gutierrez grabbed his family, drove to El Paso and requested asylum. He spent seven months in a U.S. jail as his case moved through the immigration system. He's recently been allowed to leave the jail while his request is pending. He's now in hiding in El Paso.

Gutierrez and Aguirre offer a chilling perspective on everyday life in areas of Mexico that are consumed with violence and corruption. They describe a situation that has left ordinary citizens unable to trust anyone in positions of authority.

"Thousands of families are in danger of being killed," Aguirre said. "They're vulnerable because they can't go to the police for help because that might get them killed."