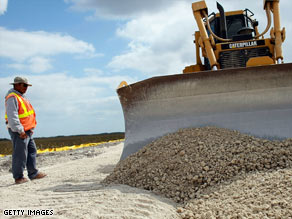 Road work is increasing across the nation in the wake of the economic stimulus plan.

The plan injects $787 billion into the nation's economy, and Obama said in his opening remarks that the money had saved the jobs of teachers and police officers.

"It's creating construction jobs to rebuild roads and bridges," he added.

In Oklahoma, 40 companies have bid on 15 new projects with the state's Department of Transportation, according to a report on KWTV.

Bobby Stem, a spokesman with the Association of General Contractors, said the $380 million in projects will put a lot of Oklahomans to work and help the state's economy.

"We're weeks away from people going out and putting on brand new boots and starting their new careers in road and bridge building," he told News9.

See a U.S. map of stimulus grants for schools, water and sewer projects »

Damon Markwell of Markwell Paving Company said he will hire 10 percent more workers if the state accepts his bid. Read the full report on KWTV

An Illinois state senator is asking for a bond measure that would help pay for a retail and entertainment complex in a St. Louis suburb, according to KSDK.

Developers claim the project would cost $1 billion and bring 3,000 jobs to the city of Glen Carbon. Many of the jobs would be in construction.

The proposed University Town Center would include a mix of retail, restaurant and entertainment businesses and be 2 miles from Southern Illinois University at Edwardsville. Watch the report on KSDK

A company is looking to expand its work force in Ohio by about 33 percent, hiring 300 workers during the next few months.

TeleTech will be holding four job fairs but requires that job seekers who want to attend register online.

"In the service industry, business is growing despite the economic downturn," a TeleTech representative told WKYC.

The customer representatives will make $9 an hour with raises after seven weeks of training and six months on the job. Read the report on WKYC

In Amarillo, Texas, along one of the major transportation routes in the United States, Robert Mathews is teaching people to drive long-haul and other types of trucks.

The program at Amarillo College's Truck Driving Academy lasts six weeks -- three in the classroom, three on the road -- and costs $2,500.

"I read the newspaper every day, every day I'd find four or five places that needed a truck driver," laid-off oil worker Ben Touchstone said. "And all of them required a [commercial driver's license]."

Mathews said you can drive more than trucks with a new license.

"Once you have the CDL, you can drive a school bus, a Greyhound bus. You will have license to do that," he told KFDA in Amarillo. Watch video of the report on NewsChannel 10

And truckers are in high demand because of the city's location.

"This is the I-40 corridor," he said. "Everything goes past here from coast to coast."

The folks at Jiffy Lube are seeing increased business, thanks to more people holding on their cars for a few extra years.

Jim Rodgers of Jiffy Lube said, "They want to maintain those vehicles and keep them in tip-top condition.

Rodgers said Jiffy Lube is hiring entry-level positions up to general manager jobs in the Kansas City, Missouri, area. He said it needs more workers during the summer.

"We're also gearing up nationwide to open probably another 100 stores in the next three to five years." Watch the interview with Jim Rodgers on CNN affiliate KSHB