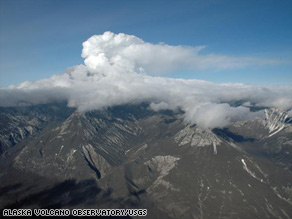 A series of eruptions has been rattling Alaska's Mount Redoubt volcano since Sunday.

The latest eruption took place at 8:30 p.m. (12:30 a.m. Saturday ET), according to the National Weather Service. That eruption followed three other ones earlier Friday.

The eruptions are the latest in a series that began Sunday.

The Alaska Volcano Observatory said the alert level remains at its highest possible designation -- red -- indicating that an eruption is under way or imminent and that the eruption will produce a "significant emission of volcanic ash into the atmosphere."

The weather service said the ash is drifting north and northeast. However, only "very light" amounts are expected to fall Friday in the Anchorage area, about 100 miles east-northeast of the volcano.

All About Alaska • Anchorage