Mets and the Citi: $400 million for stadium-naming rights irks some

(CNN) -- Monday's 2009 Major League Baseball home opener for the New York Mets at their new ballpark promises to reignite controversy -- and not just over the team's suspect pitching. 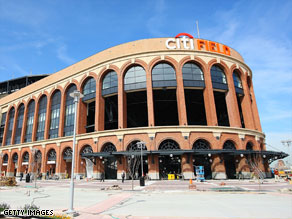 Some Mets fans feel the $400 million stadium-name deal is a bad one for all parties in these economic times.

Though the Mets played exhibition games there earlier this month, they will officially debut their new home, Citi Field, against the visiting San Diego Padres.

The $800 million-plus Queens facility is undoubtedly a state-of-the-art baseball complex with many modern upgrades from the Mets' home for the past 44 years, Shea Stadium, which is still in the process of being demolished a few hundreds yards away.

One lifelong Mets fan summed up his emotions about saying goodbye to Shea and hello to Citi by saying: "It was time for a new stadium, but I'm going to miss Shea very much."

The controversy arises not from the disappearance of the venerated old stadium but from the fact that rather than attach the iconic Shea name to the new ballpark, in November 2006 the Mets entered into an agreement with Citigroup for naming rights for the new stadium.

Reports have put the value of the deal at $400 million spread out in payments of $20 million per year over the course of the next 20 years. That would make it one of the most lucrative stadium naming arrangements in history. According to the Mets, besides the naming rights for Citi Field, "The fully integrated partnership includes Citi brand and business unit presence throughout the new ballpark."

While other corporations have invested in similar deals in the past, the financial crisis has focused particular attention on Citigroup, the Mets, and the practice of paying vast sums of money for what is essentially a long-term advertisement.

Citigroup, which now does business as Citi, has been the recipient of billions of dollars in taxpayer-funded bailout money over the past year, causing many to question the prudence of $400 million going toward branding Citi Field, especially when Citigroup cut nearly 75,000 jobs in 2008, capped by 50,000 announced in November.

Rep. Dennis J. Kucinich, D-Ohio, has been an outspoken critic of the deal. He has called attention to the issue of corporate spending discretion, or lack thereof, particularly when jobs are at risk.

"At the same time they're defending this $400 million stadium-naming deal, they lay off 50,000 people. Now, how many people could you employ for $400 million?"

The Mets claim that the construction of Citi Field created more than 6,000 temporary full-time equivalent jobs, with approximately 1,000 new positions resulting from ongoing operations at the ballpark.

One person whose job isn't at risk is Mets all-star third baseman David Wright. One of the franchise's most popular and marketable players, Wright is careful not to make any "errors" when confronted with the controversy surrounding his new Citi Field home.

"I don't comment on things that I don't know about. I'm a baseball player, so I go out there and worry about my swing," he said.

Kucinich conceded that paying to name a stadium is indeed "great advertising except for one thing, the American taxpayers have invested heavily in these banks and the bailout fund should not be used for this purpose."

He advocates that the government, now a direct investor in Citigroup, has the obligation to monitor all aspects of how federal bailout funds are used, which in Kucinich's opinion includes any marketing or promotional endeavors.

Not all Mets fans agree. One ardent fan said he's happy his hard-earned tax dollars are going to help fund the Mets' new stadium. "A lot of people pay for advertisements every day. We shouldn't be ashamed of it. Taxpayer money goes to waste on a lot of other things. Let's go Mets, I say!"

But another fan said, "If it is indeed our tax money that is actually running the stadium, I wish that I wouldn't have to pay as much money to go see a game."

A group of fellow fans, many liking the sound of a "Mets rebate" in these troubling economic times, warmly greeted his idea before an exhibition game against Boston on April 3.

David Wright and the rest of the New York Mets, along with 42,000 boisterous fans, will formally open the new ballpark when the first regular-season game there begins at 7 p.m. Monday.