Freed captain: 'We did what we were trained to do'

(CNN) -- Capt. Richard Phillips, whose capture and dramatic rescue in the pirate-infested waters off the coast of Africa last week captivated the nation, returned home to Vermont on Friday. 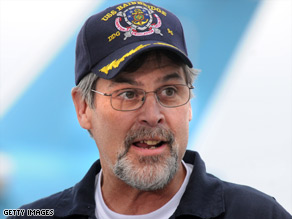 Phillips landed shortly after 4:30 p.m. at Burlington International Airport. He was met by family members, who climbed the steps of his plane to greet him.

He then strolled across the tarmac with his family, his arm wrapped around his daughter, Mariah, who wiped away tears.

"I just want to thank you for your prayers and support of my family while I was gone," Phillips said after landing in Vermont. "I'm just a bit part. I'm a seaman like all the other seamen out there."

Close-up camera shots of Phillips on Friday showed what appeared to be rope burns on his forearms, presumably from being tied by the pirates.

Phillips spoke for a short time and mostly thanked the military for saving him.

He offered no details of what happened to him during his time as a hostage besides calling it "indescribable." He also took the time to thank crew members on his ship.

"We did it. I told you it wasn't going to be 'if'; it was going to be 'when,' " he said. "We did what we were trained to do. We're just seamen. [We] do the best with what we've got, and my crew did an excellent job, and I'm so proud of them that they're all home and they're with their loved ones."

He had just completed an 18-hour flight out of Mombasa, Kenya, on a jet owned by Maersk.

Family members said they planned to spend some quality time together later Friday at their home in Underhill, Vermont -- Phillips' mother-in-law was making brownies and his best friend planned to bring over chicken pot pie and Phillips' favorite beer, they said.

Phillips offered himself as a hostage last week, when four pirates boarded his U.S.-flagged ship, the Maersk Alabama. The pirates held him aboard a lifeboat for several days in a standoff against the U.S. Navy.

Navy sharpshooters shot and killed three pirates, freeing Phillips. The other pirate had been taken into custody.

The captain's wife, Andrea, also spoke at his homecoming, calling it "one of the happiest moments of our lives." She said she was extremely proud of his bravery, but also acknowledged the captain would say he was just doing his job.

"I have always been proud to call myself an American," Andrea Phillips said. "Today, I'm even prouder. To everyone who has been involved in this that made this day possible, I just want to say thank you from the bottom of my heart. Through this past week, having Richard back safe was all that my family and I ever wanted. Now our prayers have been answered, and we have a lot of people to thank."

The 53-year-old Vermont native was praised Thursday by engineer John Cronan, one of the 19 other crew members.

"He went above and beyond the call to ensure our safety," Cronan told CNN's "Larry King Live." "I can't thank that man enough. He is the reason I'm here tonight."

Asked whether she wants to see Cronan continue working as a merchant mariner, Cronan's fiancee said it was up to him.

"John and I have an agreement," said Heather Giardinelli, who works as a pharmaceutical marketing researcher. "He doesn't tell me how to do my job, and I won't tell him how to do his."

Asked whether he plans to return to sea, Cronan said, "Yes, sir. However, the Staten Island Ferry has become much more appealing."

All About Pirates • Somalia • Maersk Alabama