Nothing the same after Columbine, say students, teachers

(CNN) -- Jennifer Muzquiz was "goth" in high school. She had, and still has, multicolored hair, a "face full of piercings," and an all-black wardrobe, even though she no longer identifies with the goth subculture. And while her style had always earned her her fair share of strange glances, she says everything changed for the worse after the Columbine school shootings on April 20, 1999. 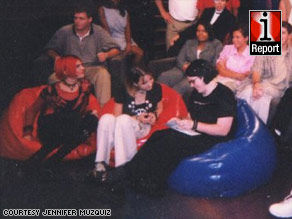 Jennifer Muzquiz, in all black, decided to study at home after feeling shunned as a goth after Columbine.

It was on that day that Eric Harris and Dylan Klebold killed 12 students and teachers in a shooting spree at Columbine High School in Littleton, Colorado.

The massacre was one of the deadliest school shootings in history, and it had a profound effect on students and teachers across the country. As the media and the public groped for meaning behind the incident, there were plenty of theories about the motive behind the massacre.

One of these was that Harris and Klebold were members of the goth subculture, or "trench-coat mafia" as they were known at Columbine, and thus had been outcasts.

This theory has been widely refuted, but for goth students around the country, the damage was done.

"As a result [of Columbine], the public were afraid of the 'goths' and 'punks' and 'metalheads' at school," says Muzquiz, who was a high school senior at the time.

"Parents, often successfully, lobbied to get trench coats and all-black attire banned in their local schools. School administrators started considering these groups to be gangs and harassment of students was rampant, with unwarranted backpack searches, detainment in the hallways by security guards, and being called into the administrative offices for questioning."

Rumors ran rampant about kids who "looked like they were going to bring a gun to school," and Muzquiz says her classmates quickly learned if they wanted to cause trouble for a student, all they had to do was report that student had a list of enemies.

"They could simply report to administrators that the person had an 'enemies list' and the school would quickly swoop in to rectify the situation, even when it wasn't the truth. ... The accused would forever be known as 'the kid with the list' and ostracized," she says.

Because of this and the new dress code restrictions, her goth friends "were afraid to go to school." Muzquiz herself caught so much flak for her appearance that she went into home studies. And though she was no longer in school, discrimination couldn't be avoided. People in town would cross to the other side of the street to avoid her and her friends, she says. iReport.com: 'Sadly, teens still tend to shun those who are different than they are'

Muzquiz was even interviewed by the national media about her experiences after Columbine. At first she regretted it and feared backlash. "I had already gotten enough crap since Columbine about wearing all black," she says. But she was glad she did it after receiving e-mails from other students who identified with her and thanked her for the interviews, including one girl who was suicidal until reading an article about her.

"One girl even had e-mailed me and said [she] was coming home to write a suicide note ... and kill herself after school. She read the article about me and it made her think twice," says Muzquiz. "In the article, I said it's not worth letting these people get to you. It's not up to them to tell you that you're wrong. She thanked me."

"[To have] a 14-year-old e-mail me ... it was just, like, whoa, I don't care who says anything bad ... I helped someone," says Muzquiz. "To this day that just sticks with me. Anything I do in my life -- nothing's going to measure to that, the fact that I helped someone realize that there's more to life."

Things changed for teachers after Columbine, too. Many say they realized they weren't just responsible for their students' knowledge, but for their overall well-being.

"Life was never the same after that day," says Barbara Rademacher, a veteran teacher from Rogers, Arkansas. Schools across the country instituted new security measures such as see-through backpacks and metal detectors, and teachers were trained to deal with violent behavior. But more than that, says Rademacher, "teachers and students are always just a little afraid."

"What Columbine said to me as an educator was that we in the education community hold people's lives in our hands. ... We as educators have a much higher duty, a much higher call, than just to teach our subject areas. ... Columbine was to education what 9/11 was to the United States: a shattering wake-up call, a disaster so profound, it permanently changed our world view." iReport.com: 'Education is literally a matter of life and death'

Kym Godwin remembers a similar wake-up call after the shooting. She was a first-year teacher in Ilwaco, Washington, at the time.

"I think most people who go into teaching have the desire to go out there and change the world and enlighten kids and bring them to this great level of knowledge," she says. "I remember when it happened, all of a sudden, it was like: 'How can I give them all of this knowledge if I can't keep them safe?' I realized at that moment that my job wasn't just giving them academic learning, it was also about protecting them and making them feel like they're in a safe place."

This realization hit home for her when her school had a lockdown. Teenagers from another part of town had entered the school, allegedly looking for a student there. A school security guard apprehended them right outside the door to Godwin's classroom.

"I remember thinking, what would happen if somebody actually walked in the door? ... And that's when it hit me, that the kids have to be able to trust me as their teacher to protect them regardless of who walks through that door. I told the kids, this is real, and I am the one in control and I will protect you. ... And I found out afterward that virtually every teacher in the building did the exact same thing. The kids looked to us and knew we were there to keep them safe."

Godwin also means "safe" in a different way. It includes protecting her students from physical harm, yes, but also protecting them from bullying or social stigmas that could potentially lead to violent behavior. Some investigators have said there is evidence to suggest the Columbine shooters were victims of bullying or ostracism, and Godwin says this is a nationwide problem.

"What happened at Columbine could happen virtually anywhere. Kids get picked on, and it could get to a point where they snap. They're human beings," she says. iReport.com: 'My students are my kids'