Police: Death of Freddie Mac's Kellermann may be suicide 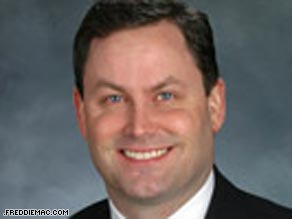 David Kellermann was found dead of an apparent hanging, a source familiar with the investigation told CNN.

There were no signs of foul play when officers arrived at the home in Vienna shortly before 5 a.m., said Lucy Caldwell, a spokeswoman for police in Fairfax County, Virginia. She said the death "may have been an apparent suicide."

"The exact cause of death ... we're going to wait for the medical examiner," he said. Police were called by someone inside the home, he said, but he didn't know who made the report.

Family members remained in the home, and several visitors went inside.

Freddie Mac has been immersed in financial problems since last year, when the government took it over in the midst of the escalating subprime-mortgage loan crisis. Federal prosecutors in New York and Virginia have been investigating it, as has the Securities and Exchange Commission, according to a March 11 company filing.

Sharon McHale, Freddie Mac's vice president for public relations, issued a statement at midday, saying, "Freddie Mac knows of no connection between David Kellermann's death and the regulatory inquiries that were discussed in our recent SEC filing."

Neighbors indicated there was no sign that Kellermann had problems.

"They were very friendly with all the young families in the neighborhood ... terrific people," said neighbor Paul Unger. "We saw him when he was out working in the yard. ... We didn't spend a lot of time together."

"We're beyond shocked," he said. "He was a great family guy with a beautiful young child."

They had the most decorated home at Christmas, Unger added. "I cannot imagine what has happened. ... This is a nightmare."

"I asked the policeman what was going on and he told me. I was stunned, silent, shed tears. I feel terrible," Unger said.

"This is a solid, salt-of-earth kind of family ... and I just cannot imagine what would have driven him to it."

Another neighbor said the family was very "community-oriented," and liked hosting parties at their house.

"We're very, very upset right now," said the woman, whose daughter baby-sat for the Kellermanns' 5-year-old daughter. "This is just too much for us."

"They were a very happy, happy couple. So it was a shock when we came upon it."

"He dedicated those talents to Freddie Mac for more than 16 years, serving in many business and finance capacities before recently taking the reins as acting chief financial officer.

"His extraordinary work ethic and integrity inspired all who worked with him. But he will be most remembered for his affability, his personal warmth, his sense of humor and his quick wit."

Treasury Secretary Tim Geithner offered his condolences in a written statement: "On behalf of the Treasury family, we are deeply saddened by the news this morning of David Kellermann's death. Our deepest sympathies are with his family and his colleagues at Freddie Mac during this difficult time."

Freddie Mac was established by Congress in 1970 to provide liquidity, stability and affordability to the nation's residential mortgage markets. It supports communities across the nation by providing mortgage capital to lenders.

Kellermann, who served as a senior vice president in addition to acting CFO, was named to those posts in September. He was responsible for the company's financial controls. This included overseeing financial reporting, compliance with tax requirements and regulations, and annual budgeting and financial planning.

Before assuming his current posts, Kellermann was corporate controller and principal accounting officer.

According to the March 11 company filing, Freddie Mac was subpoenaed for documents relating to accounting, disclosure and corporate governance matters in September, October, January and February. The filing also says that SEC staff was interviewing company employees.

The government took over Freddie Mac last year. In September, it and Fannie Mae were placed under conservatorship by their regulator, the Federal Housing Finance Agency.

Both companies back mortgages held by private homeowners, and have received massive cash infusions from the government to keep them afloat.

Kellermann held a master's degree in finance from George Washington University and a bachelor's in political science and accounting from the University of Michigan. He had served as a volunteer board member of the District of Columbia Coalition for the Homeless.

"We at [the Federal Housing Finance Agency] are very saddened by the death of David Kellermann," the agency said in a written statement. "As the acting chief financial officer of Freddie Mac during particularly challenging times, David was an inspiration to his staff and many others who were privileged to work with him."

As part of its rescue of Freddie and Fannie last year, the government made $100 billion available to each to cover future losses -- amounts that President Obama has since doubled.

In March, Freddie reported that it had asked the government for $30.8 billion after losing $50 billion in 2008. Nearly the entire loss came in the second half of the year, following the government takeover, and the company's losses deepened as the housing market continued its decline.