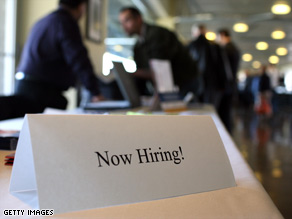 (CNN) -- A record number of senior citizens attended a job fair this week in Loveland, Colorado.

The fair, which targeted people 50 and older, drew the biggest crowd -- about 900 people -- for the annual event.

Nan Cooper, a job seeker, said applicants have to do more these days than just walk into a prospective employer's office with a resume.

She said she had even applied for jobs through the online auction site eBay.

Read the full report on KMGH

Employers in the Pittsburgh, Pennsylvania, area say they are having a difficult time filling 22,000 available positions.

Mayor Luke Ravenstahl said this week the city would increase its participation in a job placement program, both monetarily and through city organizations.

The mayor made his remarks as part of a kickoff event for Imagine Career Week, which links high school students and employers.

A spokesman for one of the groups sponsoring the week's events said there shouldn't be so many employers with open spots.

"At the same time, we have young people walking around famously saying that they can't find a job. There's a big disconnect there someplace," Paul Leger of the Allegheny Conference told WTAE.

During the career week, students will visit businesses and prospective employers will visit classrooms.

Read the full report on WTAE

Southeast: Wal-Mart to increase its N.C. workforce by nearly 6 percent

The retail chain currently employs 51,000 people at 155 locations in the state.

"In a time when many are suffering, we want North Carolinians to know that we are here to stay," David Cameron, general manager for the Carolinas, told WRAL of Raleigh.

He did not say where the jobs would be located.

North Carolina is one of eight states with unemployment above 10 percent.

Read the report on WRAL

Technical Sgt. Greg O'Conner is staying very busy these days. He is an Air Force recruiter in Bradenton, Florida.

"With the way the economy is, recruitment is up," he told Bay News 9. "I get dozens of calls every day and walk-ins from young men and women interested in joining the Air Force."

One of his recruits was 20-year-old Dakota Slentz, who cannot afford to go to law enforcement training school. He said the Air Force offers a chance for great experiences as well as a great salary.

In statistics provided by the Department of Defense, the Air Force has reported meeting its recruiting goals each month of the fiscal year, which began in October.

A building developer in Sacramento, California, says plans to turn rail yards into a residential and commercial district will require thousands of workers over the next 20 years.

Suheil Totah of Thomas Enterprises told KCRA that initial projects like building roads will mean jobs for 3,000 people. The company said more than 56,000 people will be needed for the project in the next two decades.

The 244 acres will be converted into a mix of homes, businesses, entertainment venues and government offices.

Read the report on KCRA