(CNN) -- The sport of polo needs new oversight to protect its prized horses, the nation's largest animal protection organization said after reports that a pharmacy's mistake with medication may have killed 21 animals. 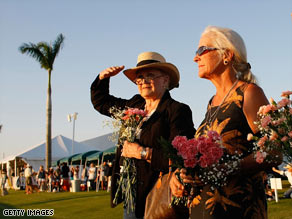 "This tragedy has brought to light the absence of drug policies and regulation within the sport of polo," said Keith Dane, director of equine protection for the Humane Society of the United States.

"There are no prohibitions or testing requirements for the use of drugs or other performance-enhancing substances," Dane said in a statement.

The HSUS statement called on the polo community "to use this tragedy as a catalyst to begin implementing reforms to ensure that policies are enacted and enforced that will ensure better protection for the horses in its care."

But a veteran Florida polo player is urging would-be reformers to take it slow.

"If you step back and look at the reality of the situation, it was a misformulation of a vitamin and mineral supplement that killed the horses, not performance-enhancing drugs," said Don Dufresne, who describes himself as an equine legal expert and horse lover.

Watch what a pharmacy says happened »

"If this were a pervasive problem in polo, and if this were to happen twice in the last year or something ... then yes, I think that (regulation) would be appropriate," said Dufresne, who is a member of the sport's equine welfare committee but emphasized he was not speaking for the panel.

"I don't see this as a pervasive problem," he said. "We have no reports to my knowledge of anyone using performance-enhancing drugs other than vitamins and mineral supplements."

The sport's governing body, the U.S. Polo Association, has been considering taking up such testing for several years, John Wash, operations president of the club where the horses fell ill Sunday, said this week.

"People are calling for reform, and maybe that needs to happen," he said.

A tearful memorial ceremony for the horses was held Thursday evening at the International Polo Club Palm Beach in Wellington, Florida. As part of the service, bagpipers played and people tossed flowers into a pond on the grounds.

Watch scenes from the memorial »

Play resumed in the U.S. Open Polo Championship after matches were postponed by the horse disaster Sunday and rain Wednesday.

A veterinary pharmacy in Florida acknowledged Thursday that it incorrectly prepared medication used to treat the 21 horses that died.

An internal investigation by Franck's Pharmacy in Ocala, Florida, "concluded that the strength of an ingredient in the medication was incorrect. We will cooperate fully with the authorities as they continue their investigations," the company said in a statement issued Thursday afternoon.

"We extend our most sincere condolences to the horses' owners, the Lechuza Polo team and the members of the United States Polo Association. We share their grief and sadness," the pharmacy's chief operations officer, Jennifer Beckett, said in the statement.

The pharmacy said it prepared medication for the horses on orders from a veterinarian.

Many teams commonly give horses injections of vitamin B12 and other nutritional supplements before competitions to prevent muscle cramps and help them recover after the match, Dufresne said.

"When you talk about polo ponies, we consider them equine athletes," he said. "A horse is so important to your game as a player, you want the horses to be as healthy as they can be, to last as long as they can. ...

"You don't want to overexert a horse. A tired horse is an unsafe horse."

The pharmacy that made the error is likely to be sued, which should put all pharmacies on sufficient notice to prevent future errors, he said.

"Everybody wants to ensure that what their horses are getting is correct and is not going to harm their horse. I thing everybody is going to become more aware of this and more cautious."

Liz Compton, a spokeswoman for the state Department of Agriculture and Consumer Services, told CNN that the agency is awaiting toxicology results from the animals and could not comment on the pharmacy's disclosure.

"Obviously, we are going to follow any and every potential lead to get to the bottom of this," she said.

The horses were trained by Lechuza Polo, a Venezuela-based team. Its captain, Juan Martin Nero, told an Argentine newspaper earlier this week that he had "no doubts" vitamins administered to the animals were at fault.

"There were five horses that did not get the vitamin, and those were the only ones that survived," Nero said.

Post-mortem examinations done by a University of Florida laboratory found significant hemorrhaging in several horses, but the findings did not single out a specific cause.

CNN's Jim Kavanagh and Kim Segal contributed to this report.