(CNN) -- Father Theodore Heck, believed to be the oldest Benedictine monk in the world, died Wednesday at the age of 108, his abbey in Indiana announced. Born in Iowa in 1901, Heck was less than a month shy of celebrating his 80th anniversary as a priest. 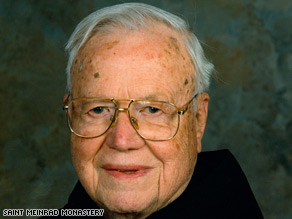 His main calling was as a teacher, DuVall said, adding that Heck had taught "thousands" of students in his career.

"Up until recently, his memory was excellent; He knew where those priests were and what they were doing," DuVall said.

And Heck continued learning throughout his own life, said the archabbot, who knew Heck for 40 years.

"Every year, he would take up a subject and read about it," DuVall said. "When he was 99, he decided he should learn Spanish, and when he was 100, he took up the computer."

The monk remained active in the life of the abbey until recently, DuVall said.

"Even up to a year or so ago, Father Theodore participated in all the public prayer with us four times a day. He sang in the choir. When he was still active teaching, he would have spent much his day in the classroom."

Heck sought out opportunities to teach and to minister, his longtime colleague said.

"For many years in the summers, he went to Iowa to teach at an extension of the Catholic University, in the '40s and '50s, so when he was not here, he was still teaching," DuVall said.

"When he was 70, he became a pastor at a nearby parish. He would drive on the weekends to lead services and hear confessions," DuVall recalled. "He did that until he was 87."

Heck "revolutionized" the way monks were educated at his seminary, DuVall said.

"Back in the 1930s, he went away as a graduate student and did his graduate work. He established the pattern where our monks began to get doctorates, not only from Catholic universities, but Purdue and Indiana University," DuVall explained.

Heck came from long-lived stock: His siblings lived into their 90s, according to DuVall.

"He once told me he was astonished to have lived this long," the abbot said. "But he saw everything in his life as a gift from God, and he accepted it."

The Office of the Dead will be prayed for Heck on Friday evening, Saint Meinrad announced. He will be buried in the Archabbey Cemetery on Saturday morning after a funeral Mass.

Saint Meinrad, which dates to 1854, operates a graduate school of theology and has more than a score of its monks in parish work, chaplaincies and diocesan assignments. The Benedictine community at Saint Meinrad consists of about 100 men who dedicate their lives to prayer and work, according to the archabbey's Web site.

All About The Roman Catholic Church • Indiana