Boston Globe backs off threat to shut paper down

BOSTON, Massachusetts (CNN) -- The Boston Globe will not take immediate action to shut down the newspaper after reaching agreements with six of its employees' seven unions, it said Monday. 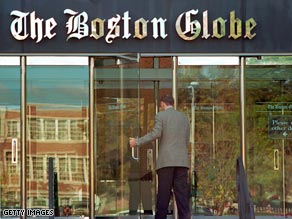 The Boston Globe says it has reached cost-cutting agreements with six of its employees' seven unions.

"We appreciate the productive and cooperative approach demonstrated by the leadership of these unions throughout these difficult negotiations," the newspaper said.

"We are not, therefore, making a filing today under the Workers Adjustment and Retraining Notification Act."

The paper failed to reach an agreement with the Boston Newspaper Guild, from which the newspaper's parent company -- The New York Times Co. -- is seeking $10 million.

The Boston Globe said it is "disappointed ... that we have not yet been able to reach an agreement with the Guild.

"Because of that, we are evaluating our alternatives under both the Guild contract and applicable law to achieve as quickly as possible the workplace flexibility and remaining cost savings we need to help put The Globe on a sound financial footing."

The newspaper's management warned the unions on Sunday that it would file a notice to shut down if a financial concession was not reached.

The Guild, which is the main union, represents more than 600 editorial, advertising and business office workers, according to The Globe. The union said the ultimatum was issued after it presented management with a proposal that exceeds the $10 million in cuts demanded.

"This tactic, while expected, is representative of the bullying manner in which the Times Co. has conducted itself during these negotiations," the Guild said in a statement.

"Despite the company's hostile tactics, we continue to negotiate in good faith and work diligently toward an acceptable outcome," it added.

In addition to the about $20 million in givebacks, another key disagreement was over a quest to eliminate job guarantees that affect about 450 union employees, The Globe reported. A Times spokeswoman told the newspaper early Monday that talks were continuing past deadline.

The negotiations follow a gloomy outlook for the 137-year-old newspaper, which is expected to lose $85 million in 2009 if it does not make major cuts, according to the Times Co.

The Globe's profits have plummeted as newspaper readers and advertisers have shifted online.

The developments come amid a raft of newspaper closings and cuts that have seen the end of print editions of The Rocky Mountain News in Denver, Colorado; The Seattle Post-Intelligencer; and The Christian Science Monitor.

The company that owns the Chicago Sun-Times and 58 other newspapers and online sites said in late March that it had filed for Chapter 11 bankruptcy. The Sun-Times Media Group, Inc. said it would continue to operate its newspapers and Web sites as usual while it improves its cost structure and stabilizes operations.