NEW YORK (CNN) -- The regional airline involved in a fatal February plane crash outside Buffalo, New York, contested a report Monday alleging the pilot did not have the training to handle the emergency that brought the plane down, and that he might have been fatigued on the night of the crash. 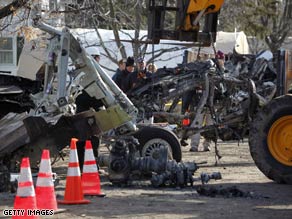 Debris is cleared from the scene of Flight 3407's crash near Buffalo, New York, in February.

Continental Connection Flight 3407, operated by regional carrier Colgan Air, plunged into a house in Clarence Center, New York, on the night of February 12, killing all 49 on board as well as one man in the house.

In a story Monday, The Wall Street Journal cited investigators as saying the crash resulted from pilot Marvin Renslow's incorrect response to the plane's precarious drop in speed: He overrode an emergency system known as a "stick pusher," which sends the plane into a dive so it can regain speed and avoid a stall.

The Journal's report said Colgan had not provided Renslow with hands-on flight-simulator training for a stick-pusher emergency.

Colgan, in rebuttal, issued a statement saying Renslow had received classroom instruction for such an emergency.

The company also emphasized that the Federal Aviation Administration does not require pilots to receive a stick-pusher demonstration in a flight simulator.

"The FAA generally trains to standards of routine line operations. They don't focus on the edges of the envelope," stall recovery expert Doug Moss told CNN.

Colgan further admitted that during his career, Renslow failed five "check rides" -- occasional tests of pilot proficiency -- including two that Colgan said he did not disclose on his application with the airline. His most recent failed check ride occurred 16 months before the crash.

"In the cases while with Colgan, he received additional training and successfully passed the check rides," the airline said.

Colgan stressed that despite his performance on check rides, Renslow nonetheless ultimately passed his pilot exams and had "all the training and experience to safely operate the Q400," the airplane involved in the crash.

Colgan further insisted that pilot fatigue was not a factor in the crash, noting that Renslow had "nearly 22 consecutive hours of time off before he reported for duty on the day of the accident."

In its statement, Colgan did not specifically address potential illness-related fatigue in 24-year-old co-pilot Rebecca Shaw, who, according to The Wall Street Journal report, said before takeoff that she probably should have called in sick.

The National Transportation Safety Board begins a three-day hearing on the crash on Tuesday. Renslow's history as well as pilot training broadly will be examined.