ATLANTA, Georgia (CNN) -- An 18-year-old Guatemalan man who doctors say faces almost certain death unless he receives a transplanted heart is surrounded by family as he waits, thanks to the kindness of strangers. 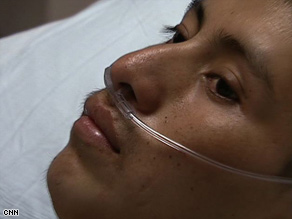 Juan Gonzalez was earning $250 a week as a dishwasher when his heart trouble began.

Juan Gonzalez, now lying in a hospital in Atlanta, hopes to learn Friday whether he will be added to the list of people eligible to receive transplants. Doctors at St. Joseph's Hospital said Gonzalez appears to be a good candidate. Without a transplant, they said, he could die in six months.

The teen traveled alone to Rome, Georgia, to earn enough money to help support his family back home. The undocumented worker took a job as a dishwasher for $250 a week.

That's when heart trouble stepped in.

Dr. Frank Stegall, a cardiologist at Redmond Regional Medical Center in Rome, told Gonzalez he had a chronically weak heart, or dilated cardiomyopathy. The organ pumps only 20 percent of the blood a healthy heart would, Stegall said.

As his heart failed, Gonzalez's plight moved the hospital staff to try to reunite him with his parents. They contacted U.S. Rep. Phil Gingrey -- himself a doctor. Gingrey persuaded the State Department to expedite travel visas for Pascual and Maria Gonzalez, and Delta Air Lines provided a free ride.

Last month, CNN aired a story on Juan Gonzalez. Afterward, the Larry King Cardiac Foundation -- founded by the CNN talk show host 21 years ago to pay for life-saving cardiac care for patients without insurance who don't qualify for state or federal assistance -- helped get Gonzalez transferred to St. Joseph's Hospital in Atlanta for evaluation.

Many of the people who saw the story on CNN were moved to offer help. It was then that the possibility of a heart transplant became real, thanks to a large donation from one of those people. The donor has asked that details of the gift not be revealed, other than his name, Sam Shapiro.

Gonzalez and his parents say they are grateful for the overwhelming support.

St. Joseph's has provided housing for the parents at a nearby hotel. Although it is not clear where Gonzalez will go once the evaluation at St. Joseph is completed, staff members at Redmond in Rome, about 60 miles northwest of Atlanta, indicated they might provide a place for the parents to say.

The parents' visas will run out in about two and a half months.

All About Guatemala • Georgia