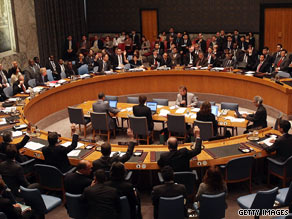 The agreement comes amid rising tension surrounding North Korea, which recently conducted a nuclear test, fired test rockets and threatened U.S. and South Korean ships near its territorial waters. The nuclear test and the firing of six short-range rockets occurred in late May.

The draft resolution reaffirmed that the "proliferation of nuclear, chemical and biological weapons, as well as their means of delivery, constitutes a threat to international peace and security."

"And we think that the message that the council will send ... is that North Korea's behavior is unacceptable, they must pay a price, they ought to return without conditions to a process of negotiations and that the consequences they will face are significant," Rice said.

Provisions already existing in U.N. Resolution 1718, passed in 2006, are strengthened by the new measure, but others are new, Rice said.